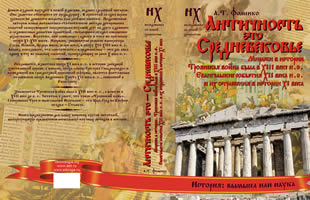 Chapter 1. ABOUT "DARK AGES" IN THE MEDIEVAL HISTORY.

1. Mysterious renaissance of the "antiquity" in medieval Rome.

2. "Antique" historian Tacitus and a famous writer of the Renaissance Poggio Bracciolini.

4. Petrarca (=Plutarch?) and "renaissance of the antiquity".

5. "Antique" Greece and medieval Greece of the XIII-XVI centuries.

6. Strange parallels in the Scaligerian history of religions.

7. "Ancient" Egypt and the Middle Ages.

8. Problems of the Scaligerian chronology of India.

9. If the history of the Ancient times was intentionally prolonged?

2. Commander Joshua (Ben Nun) as a "second Advent" of Jesus (Christ) in the XV-XVI centuries.

3. The Last Judgment of Apocalypse – it is invasion of Osmans=atamans on the Western Europe in the XV-XVI centuries.

4. Apocalyptical separation of the folks on clean and not clean, on righteous and sinner – is a reflection of a "quarantine cleaning" by Osmans=atamans of the infected areas of Europe and Mediterranean.

5. Evident traces of the editing or even radical rewriting of the Apocalypse.

6. Possible reflection in the Apocalypse of the sailing of Noah=Columbus in 1492 from the Old World to the New World.

7. Waiting for the Judgment Day in 1492 coincided with the shipping out of the fleet of Noah=Columbus to the ocean and the epoch of the Biblical Apocalypse.

8. Canonization of the Apocalypse as a "Book of condolence" of Osman=ataman conquest for edification of the descendants.

9. Some Moscow events of the XVI century are also reflected on the pages of Apocalypse

Chapter 3. THE MIDDLE AGES, CALLED THE "ANTIQUITY". ALIGNMENT OF THE SECOND AND THIRD ROMAN EMPIRES, AND ALSO THEIR OVERLAPPING ON ISRAEL AND UDAIC KINGDOMS.

1. Identification of the Second and Third "antique" Roman Empires. A chronological shift for 330 years.

2. Biographical correspondence between the tsars of the Second and Third Roman Empires.

3. Adjustment of different methods of dating on example of alignment of two epochs of the papal history of Rome. Short description.

4. Overlapping of the Israel, that is Theomachycal kingdom and the Third Roman Empire on the West. A shift for around 1230 years.

5. Overlapping of the Judaic, that is Theological, kingdom and the Third Roman Empire on the East. A shift for around 1230 years. Short description.

6. Saint Basil the Great, allegedly from the IV century A.D., is a reflection of Jesus Christ from the XII century A.D. A shift for 820 years.

Chapter 4. A FAMOUS REFORM OF THE WESTERN CHURCH IN THE XI CENTURY BY "POPE GREGORIUS ILDEBRANDO" – IS A REFLECTION OF THE REFORMS OF IMPERATOR ANDRONICUS-CHRIST FROM THE XII CENTURY.

1. "Roman pope Gregorius Hildebrand" from the XI century is a reflection of Andronicus-Christ from the XII century with a shift for one hundred years. Next chronologists moved the life of Christ for 1050 more years down, to the I century.

3. Roman John Crescentii allegedly of the X century is a reflection of evangelic John the Babtist from the XII century.

4. "Roman pope Gregorius Hildebrand", related to the XI century, is a reflection of Andronicus-Christ from the XII century.

5. The star of Bethlehem allegedly of the I century and a famous supernova explosion around 1150 (further moved by chronologists to 1054).

6. The Crucifixion of Jessus Christ on the mountain Beykoz = evangelic Calvary, placed not far from Tsar-Grad, on the bank of the Bosporus.

Chapter 5. THE TROJAN WAR WAS IN THE XIII CENTURY A.D. ITS PHANTOM REFLECTIONS – GOTHIC AND TARQUINIAN WARS.

1. Overlapping of the "antique Tsar Rome" of Titus Livius on the Third Roman empire with a shift on 1053 years.

5. Who, when and where for the first time told us about the Trojan war?

6. A strange destiny of the poems of Homer. Who told Homer about the Trojan war, which happened allegedly five hundred years before him?

7. How to learn by heart and remember all the life seven hundred pages of the poems of Homer?

8. Where the poems of Homer were kept allegedly for two thousand years?

9. Dares and Dictys - "imaginary participants" of the Trojan war.

10. Medieval trouveurs and francs about the Trojan war.

11. Ruins of the poor medieval fortification, which Heinrich Schliemann by mistake called "the remainders of the Troy of Homer".

13. A legend about a woman and reason of the Trojan war.

14. Beginning of the Trojan war.

21. Other legends of the Trojan war.

22. What is surprising for modern historians in the Trojan chronicles?

23. How close are descriptions of the Trojan and Gothic wars?

24. Other wrong datings of the Trojan war.

25. A list of phantom duplicates of the heroes of the war of the XIII century A.D. (Trojan = Tarquinian = Gothic).

2. A famous revolt of Spartacus as a muddy reflection of the episodes of the Trojan = Tarquinian = Gothic war of the XIII century A.D.

1. The Second empire and empire of the X-XIII centuries.

2. Empire of the X-XIII centuries. Correspondence between the war of the X century and "antique" Trojan = Tarquinian = Gothic war.

3. "Antique" Second Roman empire and the epoch of the XIII-XVII centuries.

4. Overlapping of the Third Roman empire on the Holy Roman Empire of the X-XIII centuries and on the empire of Habsburgs of the XIV-XVII centuries. A shift on 720 years and on 1053 years.

5. The war of the XIII century as a prototype, original of the "antique" Trojan = Tarquinian = Gothic war.