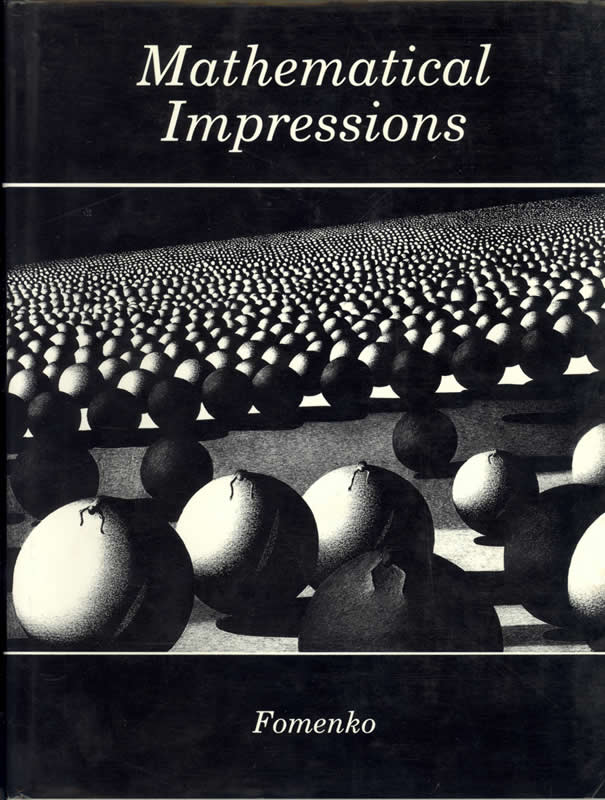 Dedicated to my parents,
Valentina Polikarpovna and Timofei Grigor'evich Fomenko

"I think of my drawings as if they were photographs of a strange but real world, and the nature of this world, one of inﬁnite objects and processes, is not well known. Clearly there is a connection between the mathematical world and the real world... . This is the relationship I see between my drawings and mathematics."

Anatolii Fomenko, in the Introduction

Anatolii Fomenko is a noted Soviet mathematician with a talent for expressing abstract mathematical concepts through artwork. Some of his works echo those of M. C. Escher in their meticulous rendering of shapes and patterns, while other pieces seem to be more visceral expressions of mathematical ideas. Stimulating to the imagination and to the eye, his rich and evocative work can be interpreted and appreciated in various ways—mathematical, aesthetic, or emotional.

This book contains more than 80 reproductions of works by Fomenko. In the accompanying captions, Fomenko explains the mathematical motivation behind the illustrations as well as the emotional, historical, or mythical subtexts they evoke. The illustrations carry the viewer through a mathematical world consisting not of equations and dry logic, but of intuition and inspiration.

Since the mid-1970s, Fomenko has created more than 280 illustrations. Not only have his images ﬁlled pages of his own numerous books on geometry, but they have also been chosen to illustrate books on other subjects, such as statistics, probability, and number theory. In addition, his works have found their way into the Soviet scientiﬁc and popular press and have been displayed in more than 100 exhibits in the Soviet Union, Holland, India, and much of Eastern Europe.

Fomenko describes his images as "deep reflections about the essence of being and about the place of modern man—in particular, the learned man—in the stormy and unpredictable world surrounding him." His illustrations are the product of a sensitive, aesthetically attuned mind diving deep below the surface of modern mathematics and emerging with great stories to tell.

Born on March 13, 1945 in the Ukrainian city of Donetsk, Anatolii Fomenko is the only child of a mining engineer and a teacher of Russian literature. Despite the brutality of the Stalinist years, his family made great efforts to ensure him an excellent education, and, in 1961, he entered the Mechanics—Mathematics Department at Moscow State University, where he has remained throughout his career.

To date, Fomenko has written more than 140 scientiﬁc publications, as well as 16 books and monographs. Much of his energies have also gone toward mathematics education: he is author of a wide variety of textbooks, especially in the area of modern geometry and topology.

Fomenko's fascination with art and drawing emerged when he was quite young, and he began creating paintings and sculpture as early as age 13. Since then, he has devoted a great deal of time to studying the work of many artistic masters. His work has been shown in exhibits around the world.

The Matematical Intelligencer
Volume 8 , Number 2 , 1986
Springer-Verlag New York
Mathematics and the External World:
An Interview with Prof. A. T. Fomenko