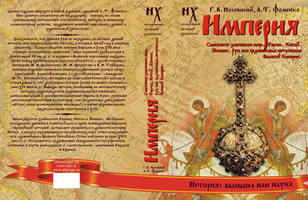 Part 1. RUSSIA AS A MOTHER COUNTRY OF THE "MONGOL" EMPIRE AND ITS ROLE IN THE MEDIEVAL CIVILIZATION.

Chapter 1. "EXTRAORDINARY" GEOGRAPHICAL NAMES ON THE MAPS OF THE XVIII CENTURY.

3. Kuban Tartars = Kuban Cossacks on the maps of Russia at the time of Peter I.

5. Tsar-Grad and Sarai on the maps of the epoch of Peter I.

6. The date "750", written on the Russian military map, proves that empress Elisaveta Petrovna governed at the eighth century A.D., and not in the eighteenth.

7. On some maps of the XVIII century Russia and Muscovy are different regions.

8. How the Russian Empire was called on the maps of the XVIII century.

9. What was earlier called Lithuania.

1. A general characteristics of the Russian coins.

2. A mysterious "coinless period" in the history of Russia.

3. A strange, allegedly half-thousand years, absence of gold coin in the Western Europe of the VIII-XIII centuries.

4. From where a double-headed eagle appeared on Russian coins.

6. Russian-Tartar signatures and allegedly "senseless signatures" on the ancient coins of the Moscow princedom.

7. Russian-Tartar bilingualism of Russian coins of the XIV century.

8. Where the Tartar money was printed.

9. Why the Great prince Ivan III minted the Hungarian emblem on some of his coins.

10. Several general considerations on the history of coins.

Chapter 3. TRACES OF THE GREAT = "MONGOL" EMPIRE IN THE DOCUMENTS AND MONUMENTS OF EUROPE ANS ASIA.

3. Why a coronation mantle of the Holy Roman Empire is covered only with Arabic signatures.

4. Church-Slavonic signature in Glagol in the catholic cathedral of Saint Vitus in Prague.

5. Rather interesting title of Russian tsar of the XVII century Alexey Mikhailovich Romanov, written on his seal.

7. A contribution of N.А.Morozov into historical science is huge. But his Westernism theory is wrong.

8. Western-European countries were afraid of "Tartars-Mongols".

Part 2. NEW CHRONOLOGY AND A CONCEPT OF THE HISTORY OF CHINA

1. Which astronomical events are described in Chinese chronicles.

2. When Chinese created a spyglass.

1. Suspiciously high frequency of the appearance of Chinese comets.

2. Years of the appearance of Chinese comets.

3. European comets and the years of their appearance.

4. Comparison of the lists of European and Chinese comets.

1. General characteristics of the Chinese history.

2. Landmarks of parallelism between the Chinese and phantom European history earlier than the tens century A.D.

3. Landmarks of parallelism between the Chinese and Roman-Byzantium history of the X-XIV centuries A.D.

4. Chinese history of Khitan, a kingdom of Prester John and the appearance of "Mongol" Empire.

5. The history of China after the XV century A.D. Chinese Wall.

8. What happened on the territory of modern China earlier than the XVII century A.D.

9. If paper, gunpowder and silk were invented in China?

10. About historical sources of modern Mongols.

11. Where China was placed on the old maps.

1. Military caste of Japan samurai – these are descendants of Horde conquerors of Japan of the XIV-XV centuries.

2. If medieval Japan was a Christian country? Traces of Russia-Horde in Japan.

3. For production of famous samurai swords in the Middle Ages a "Tatar process" was used.

Part 3. SKYTHIA AND THE GREAT TRANSMIGRATION OF PEOPLE. COLONIZATION OF EUROPE, AFRICA AND ASIA BY RUSSIA-HORDE IN THE XIV CENTURY.

1. Intervention to Europe, Mediterranean and Asia at the time of Ivan Kalita = Baty-khan. Appearance of the Great = "Mongol" Empire.

4. Medieval Western evidences about Kingdom of Prester John, that is about Russian-Horde Empire of the XIV-XVI centuries.

5. Kingdom of Prester John or Russian-Ataman Horde as the main force of the XIV-XVI centuries.

6. New look on the Kingdom of Prester John.

Chapter 9. A SLAVONIC CONQUEST OF EUROPE AND ASIA. RARE BOOK OF MAURO ORBINI ABOUT "WIDENING OF SLAVONIC FOLKS ".

1. Did Western Europe remember "Mongol" conquest as a Slavonic one?

2. Why Peter the Great built Petersburg on the wetlands? About the book of Mauro Orbini.

3. Slavonic conquest of Europe and Asia in the book of Orbini.

4. Our concept explains the book of Orbini.

5. Some people were struggling and winning, others were losing, but writing history.

9. Book of Orbini is written based on Western European material.

10. Our point of view on the book of Orbini.

11. Orbini about use of Cyrillic alphabet in Western Europe.

12. Orbini about the Goths Slavs.

14. Orbini about the Hunns and about Attila as a Russian commander.

15. Name "Hungarian" in the title of Russian rulers.

16. Orbini about campaigns of Russian Moscovians at the epoch of "antiquity".

17. Orbini "about the Finns or Fenns
Slavs".

19. Orbini "about the Normans Slavs".

Chapter 10. THE SLAVS IN THE EUROPEAN HISTORY, ACCORDING TO THE BOOK OF VOLANSKIY AND KLASSEN.

1. Why the books of Orbini, Chertkov, Volanskiy, Klassen and many others were neither demolished nor perceived.

2. Evidences of Slavonic roots in the Western Europe are naturally perceived in our concept.

4. Slavonic presence in Europe was described in many books even in the XVIII century.

Chapter 11. MEDIEVAL SCANDINAVIAN GEOGRAPHICAL ESSAYS AND MAPS TELL ABOUT THE "MONGOL" CONQUEST OF EURASIA AND AFRICA.

2. Japheth – a son of biblical Noah. Which folk was called with this name and where it lived.

4. Slavonic conquest of Europe allegedly of the VI-VII centuries A.D. as one of the reflections of Russian "Mongol" conquest of the XIV-XV centuries.

5. Comparison of West and East in the works of А.S.Khomyakov.

Chapter 12. WESTERN EUROPE OF THE XIV-XVI CENTURIES AS PART OF THE GREAT = "MONGOL" EMPIRE.

1. Allegedly strange, but really understandable attention of Romanovs to Russian sources, telling about the Western Europe.

2. If before-Romanovs Russia was really "afraid of the foreigners", as historians of the epoch of Romanovs started to state?

3. Invasion of the Turks-Ottomans=Atamans on the Western Europe. Why they were called Tartars.

4. Russian golden cupolas. From where silver appeared in Russia, which didn't have any silver mine that time.

5. Unsuccessful attempts of the Western Europe in the XV-XVI centuries to split the union of Ancient Russia and Osmania=Atamania.

6. How the Western Europe finally managed to force a wedge between Russia and Turkey.

10. If we imagine in a correct way the Western-European medieval inquisition?

12. Knights name Rosh=Rus in the history of crusades.

14. Direct participation of Russian troops in the assault of Constantinople.

15. If we imagine in a correct way the history of fire arms?

16. Transcaucasia or Western Europe was conquered by Russian-Horde troops?

17. From where appeared the name of the city of Stockholm, the capital of Sweden.

18. In the XVII century "Mongol"= Great Empire was split.

Chapter 13. WHO IS THE GREAT CONQUEROR TAMERLAN-TIMUR.

2. A picture of Timur, restored by Gerasimov according to the brainpan, derived from his tomb. Was Timur European?

3. About Arabic names in the Russian history.

5. Temir=Tamerlan=Mohammed II as a prototype of Philipp II and, partly, Alexander the Great.

6. When and what for was written the history of the campaigns of Alexander the Great?

8. What means the name Timur.

9. Wars of Timur with Tokhtamysh.

13. Reflection of events of the time of Mekhmet II (XV century) in the history of Tamerlan (XIV century).

14. If Horde, headed by Timur was "wild"? How his troops were organized.

15. Of what faith was Tamerlan?

17. About customs at the court of Timur.

1. An ancient Т-like form of the Christian cross remained on many medieval pictures.

2. On many pictures the Crucifixion is presented as an event in evangelic Jerusalem, placed near the big sea strait.

3. Pieces of art, prescribed today to a famous artist allegedly of the XV-XVI centuries Albrecht Durer, were probably made one hundred years later – in the XVII century. A famous "Arch of Glory of Imperator Maximilian I" of Dured.

4. The oldest survived globe – allegedly a globe of Martin Behaim of 1492 – was, probably, made much later, not earlier than the XVI-XVII centuries.