"Antique" Rome and "German" Habsburgs – these are reflections of the Russian-Horde history of the XIV-XVII centuries.
A legacy of the Great Empire in the culture of Eurasia and America 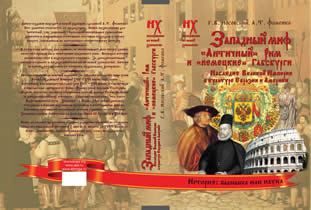 1. The accepted today version of the global history was made relatively recently, only in the XVII century. Probably, this version is not correct.

Chapter 1. SHORT RECONSTRUCTION OF THE HISTORY BEFORE THE XIX CENTURY.

1. The epoch earlier the XI century.

2. Epoch of the XI-XII centuries. Birth of Christ in 1152 and his crucifixion in Tsar-Grad in 1185. Christian religion. The history of evangelic Wise Men reflects the worship of Russia-Horde to Andronicus-Christ in the XII century.

3. XIII CENTURY: the great Trojan war as a revenge for Christ. Russia-Horde organizes the Crusades on Tsar-Grad and soon a center of the Empire is moved to Vladimir-Suzdal Russia.

6. XVI – beginning of the XVII century. Reformation in the Western Europe. The Great Distemper in Russia.

7. XVII century. Rise to power of Romanovs. Break with Turkey.

8. XVIII century. Partition of the remains of Russia-Horde between Romanovs and the appeared United States of America.

9. In the XVIII century the governance of Romanovs still remained in many relations an occupation of Russia by foreigners. Our analysis of the list of actual members of the Russian Academy of Sciences of the XVIII-XIX centuries.

10. How the Great = "Mongol" Empire was organized.

12. A spirit of the Mother country.

13. Falsification of history in the XVII-XVIII centuries.

Chapter 2. "ANTIQUE" ROME – THIS IS A REFLETION OF THE THIRD ROME, THAT IS RUSSIA-HORDE OF THE XIII-XVI CENTURIES.

1. Tsar-Grad Kingdom of the XI-XII centuries and the Great = "Mongol" Empire of the XIII-XVI centuries are the originals of all the main "ancient kingdoms" of the Scaligerian history.

4. Habsburgs of the epoch of the XIII-XVI centuries govern Western Europe "from a distance".

1. Vasily I reflected in the Western chronicles as "Rodolph I".

2. Dmitry I reflected in the Western chronicles as "Rodolph I".
3. Andrey Novgorodsky = (?).

4. Michael the Saint reflected in the Western chronicles as "Adolph I Nass" + "Albrecht".

9. Ivan the Gentle also reflected in the Western chronicles as "Ludwig Bavarian".

10. Dmitry Suzdalsky reflected in the Western chronicles as "Charles IV".

12. Vasily I reflected in the Western chronicles as "Ventseslav".

13. Murza Teginya reflected in the Western chronicles as "Frederic Prince of Brunsvigian".

14. Yury Dmitrievich reflected in the Western chronicles as "Robert Palatian".

15. Vasily Kosoi reflected in the Western chronicles as "Josie".

16. Vasily II reflected in the Western chronicles as "Ventseslav" + "Siegmund".

17. Dmitry Shemyaka reflected in the Western chronicles as "Albert Austrian".

18. Ivan III reflected in the Western chronicles as "Frederic III".

19. Vasily III reflected in the Western chronicles as "Maximilian I".

20. Distemper. Elena Glinskaya reflected in the Bible as Jezebel, the tsarina of Israel.

21. Ivan IV "the Terrible" reflected in the Western chronicles as "Charles V".

24. Ivan V Ivanovich reflected in the Western chronicles as "Ferdinand".

25. Simeon-Ivan Bekbulatovich reflected in the Western chronicles as "Maximilian II".

30. Probably, a fake coronation medal of Dmitry Ivanovich, tendentiously called in the Romanovs history "Lzhedmitry I".

33. Capture of power by Romanovs.

Chapter 4. FRENCH QUEEN EKATERINA MEDICI IS A REFLECTION OF RUSSIAN TSARINA SOFIA PALEOLOG IN THE WESTERN EUROPEAN CHRONICLES. WHAT IS THE MASSACRE OF ST. BARTHOLOMEW.

1. Sofia Paleolog (epoch of allegedly XV century) and Ekaterina Medici (epoch of the XVI century). Youth, wedding, rise to power in the Empire.

3. The death of king Henry II is a reflection of the death of tsar-chan Vasily III, that is Biblical tsar Ahab. Biblical Micah – this is diviner Michael Nostradamus.

4. The Massacre of St. Bartholomew was an answer to "Mongol" Empire to the rebel of the XVI century, described in the Bible as "beating of Persians" (Purim).

1. The two-headed eagle – is a symbol of "Mongol" Russian-Horde Empire of the XIV-XVI centuries – is presented on many allegedly "antique" monuments of Europe, Africa and Asia.

2. The two-headed "Mongol" eagle reigned nearly on all the main medieval emblems of Europe.

3. After success of the rebellion of Reformation in the XVII century, most Western European eagles-emblems "lost" their Eastern head. After this the eagles became one-headed and looking to the West.

Chapter 6. AN EDUCATIVE STORY OF THE TSAR CROWN-WREATH – THE SECOND MAIN SYMBOL OF THE GREAT = "MONGOL" EMPIRE OF THE XIV-XVI CENTURIES. HOW IT LOOKED AND WHY IT DIDN'T REMAIN.

1. Why on the old pictures on the heads of Russian tsars-khans of the XIV-XVI centuries we often see crowns, amazingly unlike those, which are shown to us in museums today.

2. Who and what for destroyed the main golden crown-wreath of the Great = "Mongol" Empire.

3. The main crown-wreath of the Great = "Mongol" Empire reflected in the old crowns of its many provinces.

Chapter 7. TRACES OF THE GREAT = "MONGOL" EMPIRE ON THE REACHED US MEDIEVAL MAPS.

2. Ivan Kirillov – a famous Russian map maker of the XVII century - made several tens of maps, most of which were destroyed by Romanovs.

3. Today we are being convinced that the medieval map makers through their ignorance mixed and combined the "antiquity" with the Middle Ages.

4. Why one of the main units of measure of distances in the medieval Western Europe was called "ruten".

5. A map of the world, created in 1707 by Vasily Kiprianov and presented to Peter I, expresses the world in a considerably different way, than the accepted today historical version.

6. The Horde was marked on the Byzantine map-mosaic allegedly of the VI century A.D. in the Holy Land, near Jerusalem.

1. Works of the famous "Early-Medieval" author Cosmas Indikoplevst "appeared from the Dark Ages" at the West only in the XVIII century, and in Russia – not earlier the XV century.

2. Who were Christian "stylits". Probably, "pillar" – this is a high bell tower-mosque.

3. A thoroughly knocked down and cleaned signature on the medieval tomb of Gotfried in the Cologne Cathedral.

4. A small German city Trier and "the great city Trev" of the old chronicles.

5. Relics of Matthew the Evangelist were "found out" in the XII century. Why they appeared exactly in the German city Trier.

6. Triumphal arcs were constructed by the "Mongol" Empire not only in Italy and Europe, but also, for example, in Osmania=Atamania.

7. Crosses with half-moons, worn close to the body, from the old burial mounds.

8. Red Marksman kaftans on the emblems of the ancient owners of Shilion castle.

9. Embalmment was practiced in Russia at least until the end of the XVIII century.

10. In the XVII century the Russian language was still widely spread in Karelia and Finland.

11. A metallic crowbar-icepick for cleaving of ice became a ritual item in the "Ancient" Egypt.

Chapter 9. FAMUS JOAN OF ARC IS DESCRIBED IN THE BIBLE UNDER THE NAME OF PROPHETESS AND WARRIORESS DEBORAH.

1. Shortly about French version of the history of Joan of Arc.

2. The history of Biblical prophetess and warrioress Deborah.

4. Warlike letters of Joan of Arc and a warlike Song of Biblical Deborah.

5. The Bible doesn't say anything about the death of Deborah. With this there are several contradictory versions of the destiny of Joan of Arc.

6. Some old pictures of Joan of Arc = Biblical Deborah.

Chapter 10. A FAMOUS FRENCH MARSHALL GILLES DE RE, A LEGENDARY COMPANION OF JOAN OF ARC, IS DESCRIBED IN THE BIBLE UNDER THE NAME OF A FAMOUS SOLDIER AND BOGATYR SAMSON

1. Shortly about French version of the history of Gilles de Re, a personage allegedly of the XV century.

2. The history of Biblical soldier Samson and guileful Delilah.

4. Magic hair of Samson, in which there was his force, and magic "Blue" Beard of Gilles de Re.

5. Biblical Delilah personalizes Gelles de Sille – a companion of Gilles de Re in magic, or is an image of medieval "devil", who debauched Gilles de Re.

6. Voluntary surrender into captivity of both heroes, multiple attempts of the enemies to daunt them, and, finally, death of the heroes.

7. Why Samson was called Samson?

8. Reflections of the history of Gilles de Re = Samson in folklore of the other countries.

9. The epoch of Judges Israelite, described in the Biblical Judges Book, this is the epoch of inquisition of the XV-XVI centuries.

Chapter 11. BIBLICAL HISTORY ABOUT "THE BODY, CUT ON PIECED" AND THE WAR OF ISRAEL WITH THE KNEE OF BENJAMIN, THIS IS A FAMOUS EXPULSION OF THE JEWS FROM SPAIN AT THE END OF THE XV CENTURY.

1. The Judges Book about "the body, cut on pieces".

2. In the history of inquisition of the XV century also a strange plot under the name "An art of cutting" is fixed. This is the history of Enrico Aragonese.

3. According to the Bible, an assault on husband-Levite and death of a woman leads to the war of the whole Israel against the knee of Benjamin. In Spain of the XV century an assault on inquisitor Arbues and his murder entails a massive persecution of Jews.

4. Destruction of the knee of Benjamin by Israelites – this is a destruction of Marranos in Spain of the end of the XV century. Exodus of Jews from Spain – this is acquisition of America by the troops of Horde and Osmania=Atamania.

Chapter 12. THE ORIGINAL OF BIBLICAL STORY OF SAMSON IS A FAMOUS STRUGGLE OF ZEMSHCHINA AGAINST OPRICHNINA IN RUSSIA AT THE TIME OF IVAN IV THE TERRIBLE IN THE XVI CENTURY.

1. Biblical Samson – it is a bit allegoric description of Zemshchina in the face of its two main leaders and two other famous personages of that epoch.

2. Comparison of the story of Samson with the struggle of Zemshchina agains Oprichnina discovers bright parallelism.