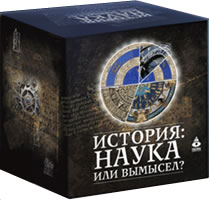 Do we really know our history?

Scientific books and museum expositions, historical novels and films convince us that nearly everything is known about the history of mankind and nearly on every question of a curious mind historians will definitely find a ready answer. But if we look more closely into our past, we will find there many strange things and mismatches. Why, for example, usually attentive to historical details painters of the Middle Ages painted Biblical and antique personages like their coevals? How the ancient warriors could cut their enemies with bronze swords, if there was no bronze at that time? From where the iron arms appeared in the Ancient Egypt. Based on what Ivan the Terrible called himself a direct descendant of the Roman Imperator Augustus? It seems that these and many other miracles should have made historians look more closely into our past. But this didn't happen until now, and that's why involuntarily appears a question: if we really know our history?

What the history is based on

From the ancient times and until our time the whole history of mankind is accurately dated. In many historical and archeological guides one can find an answer to nearly any question. In museums all over the world the unique showpieces – eyewitnesses of the past epochs are kept. Among them there is hardly at least one, on the plate of which it is written: "unknown origin" or "unknown age". All these items are precisely grouped and decomposed in a strict chronological order. But why the scientists came to the conclusion that, for example, this jar is related to the fifth century B.C., and this one – to the eighth century already A.D? It is considered that the methods of identification of the age of ancient objects are well checked, and the main thing, very reliable. But is it so in reality? If the world history is really based on the strict scientific proofs?

The truth can be calculated

Unfortunately, the existing today scientific methods of dating of the items of the past are far from perfection. With this it is extremely difficult, and often simply impossible to build the chronology of historical events. And the generally accepted today chronology of the events, built with these methods, can't be considered absolutely correct. It appears that the history – in particular the «ancient», «antique» and medieval – it is in a considerable degree a myth, invention, novel. Anything but not science. And the mankind knows few about its past. But we still have a chance to restore the truth. And this chance is given to us not by historians, but by… mathematicians. This film is devoted to unique authors' methods of dating of historical events, developed by Russian scientist, academician of the Russian Academy of sciences Anatoly Timofeevich Fomenko. Having applied these methods, the scientists discovered that a real history of the mankind is much shorter than the one, which we study at schools and universities…

Alchemistry of the pyramids or how they built in ancient Egypt

Among many monuments, left by the ancient civilizations, of course, the most famous are the pyramids of Ancient Egypt. It is considered that it is for a long time known, who, when and what for built them. But until now there is no answer to the question: how they built? How the ancient architects processed and moved huge stone blocks? There are a lot of suppositions, but any of them has weak sites. Numerous attempts of the researchers to check the theory with practice failed. But already at the second half of the 20 century engineers-chemists made expertise of the ancient Egyptian construction stone. A miracle of the ancient pyramids was found out! But this opening was not a sensation. A scientific world answered with full silence. Egyptologists pretended that they didn't notice the opening. And they don't want to notice until now.

A miracle of the Egyptian zodiacs

The world of pyramids, pharaohs and sphinxes. The world of miracle, which leads us to the very far times. In order to touch this miracle thousands of tourists from all over the world come to Egypt. Visiting the Egyptian tombs and churches they look at the wonderful paintings and bas-reliefs, which remained until our time. These paintings are the signs, which the scientists and architects of Ancient Egypt left to their descendants. It is considered that these signs are yet not figured out. But Russian scientists-mathematicians managed to decode. It appeared that important dates of the history of Egypt are codified in these dates. But official Egyptology doesn't want to notice it and insistently keeps silence. Why? What these ancient pictures may tell about?

Lord Novgorod the Great, who are you?

Novgorod the Great took a special place among the ancient Russian cities. It competed first with Kiev and next with Moscow for the right to be called the capital of Russia. It was the reaches boyar republic. A trade turnover of this city was not equaled in Russia. Exactly through Novgorod the Great the famous Trade route from the Varangians to the Byzantium. But archeological diggings and analysis of the ancient chronicles give reason to state that modern Novgorod on Volkhov has never been a huge political and trade center. And some fragments of the ancient texts contradict with the Russian history in general and the history of Novgorod the Great in particular. If a city on Volkhov really was famous Lord Novgorod the Great?

The battle of Kulikovo is one of the greatest events of the Russian history. It is considered that the battle on the Kulikovo Field in 1380 was the first step on the way of liberation of the Russian lands from the Mongol-Tartar yoke. If it was so in reality? The results of many years of studies of the Russian scientists say about different things. There were no any conquerors in Russia at that time. There was no any three hundred years yoke of the Golden Horde. The troops of Dmitry Donskoy struggled on the Kulikovo Field not with the steppe nomads. They had an absolutely different enemy. And the place, which is considered today to be the Kulikovo Field, bears this name undeservingly. The same is also brightly shown by archeological findings and ancient Russian chronicles. Where actually the famous historical events took place? Where is it, this Kulikovo Field?

Today nearly everyone knows about the Mongol-Tartar yoke in Russia. At school we are told about the enslavement of the Russians by the steppe nomads, who had no culture, no written language. It is considered that this invasion lead to huge human sacrifices among Russian folk, to destruction and plunder of its material and spiritual values. Since early childhood we are taught that as a result of the foreign yoke economic and cultural development of Russia, compared to Europe, allegedly was thrown on three hundred years back. We are persistently told that for nearly three centuries Russia sank in the darkness of poverty, ignorance, cruelty and violence, having turned into economic and political dependence to their enslavers – Mongol Khans and Governors of the Golden Horde. This is written in official books on the history of Russia. But was it so in reality? The historical facts and evidences, which reached us, say about absolutely different things.

In what century lived Christ?

Today nearly any person, independently from his faith, knows the evangelic story about Jesus Christ. The time of his earth life – it is not only the epoch of the origin of new religion. This is a new point of calculation of the chronology of mankind. In most countries of the world the count of years from Christmas is accepted. Nobody doubts that from the moment of this very important for the mankind event passed not two thousand years. But why people are so sure in it? The authors of the film don't touch the issues of faith and church dogmas. The task of this film is different: to clarify the issues of historical-chronological character. It is possible that the generally accepted date of Christmas is wrong and it should be not 2009 on the calendar today, but an absolutely different date.

In the ancient times there was a stardom named Judaea. A capital of this stardom was the city of Jerusalem. Modern historians and archeologists state that this stardom was placed at the South-West Asia, where Israel is placed today. The capital of Israel is also named Jerusalem. The scientists, who study the Biblical history, state that the ancient Judaic Jerusalem and modern Jerusalem – it is the same city. But not all the scientists are sure, that the ancient Judaea was placed exactly here, near the Eastern seashore of the Mediterranean sea. This film is devoted to the version of the authors of the theory of "New chronology" А.Fomenko and G.Nosovskiy, who suppose that the Judaic stardom was placed absolutely in a different place, and under the name Jerusalem in the Bible is described absolutely not the city, which we call Jerusalem today.

For many years Moscow stands on the Russian land. So much is written and told about it that it seems, that everything is known about this ancient city. But this is not so. Unfortunately, our knowledge of history sometimes is superficial. We inattentively read even the brightest pages of the past. And information about the most significant historical sites is often taken not from the ancient documents, but from tourist guides. One of such sites is the Moscow Kremlin. A wonderful city-fortress. The castle of power, the ancient spiritual center, the symbol of Moscow and the whole Russia. A greatness of the Kremlin astonished in all the centuries. There was always something mysterious in its history, some secret sense and meaning. Many researchers spent many years to unriddle the mysteries of this ancient fortress. But it appears that the key was at their hands. It was necessary just to look in ……the Bible.

Reconstruction of the history

The modern historical science is bulging at the seams. The scientists – mathematicians, who created new mathematical methods of research of historical documents, blow out of the water the generally accepted chronology of the historical events. But chronology lies in the base of the history, being its "spine column". A change of chronology automatically leads to necessity to review all the events of the world history. It appears that many, known to us by books and cinema, governors and even events of the Ancient world didn't exist at all, that they are phantoms, reflections of the later medieval governors and events. A reconstruction of the history, made by the scientists based on the new chronology of the world, removes many miracles and riddles in the past of the mankind, finds simple logical explanations to those historical events, about which historians argue already for not one century. It also appears that the history of the European states is artificially prolonged to the past, and the history of Russia is intentionally shortened. Moreover, after acquaintance with the present Reconstruction of the history much from the happening today become more clear.