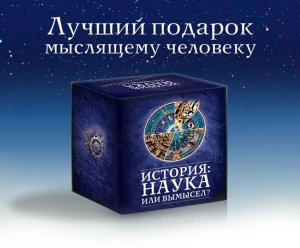 The film is devoted to falsification of the written history. It will tell about mass destruction and falsification of written documents of the XVI-XVIII centuries. That since the ancient times people understood, how important it was to know the history of one's folk and keep it for the descendants, as exactly the history helps people to understand their belonging to one or another nation and culture. But for centuries the history had one more task – in any state it guarded the political interests of its governors, that means, that it was in a great measure subjective. Although today there are enough examples of distortion of the world history, many people are still sure that it is impossible to falsify the history in a global scale. The reason is in the generally accepted historical version of Scaliger-Petavius, on which each of us is educated. Having watched this film, the viewers will learn not only about little-known facts of falsification of historical documents, but also that often falsification of history is not only possible but inevitable.

The film about false art pieces and material culture, a number of which is so huge, that nobody can be sure in the authenticity of his acquisition: neither a tourist, who bought allegedly an «ancient» Egyptian papyrus, nor a collector, who has found a rarity in a curiosity shop, nor an art expert, who bought a showpiece for the museum, which passed many inspections. Unfortunately, there are a lot of fakes of the antiques, pieces of art, antiquity and material culture today in the world. The fakes appear not only in the private collections, but in the halls of the most authoritative museums of the world, they may appear in a shop of an Arabian seller, and on the auction «Sotheby's». Among falsifications there are not only pictures, sculptures and items of religious cults, but also architectural constructions, for example, churches. Once most of such faces were done to serve as a grounding and confirmation of the historical version of Scaliger-Petavius, that's why until now they prevent us from getting a correct picture of the history of mankind.

Legendary archeological monuments or great fakes? The film is addressed both to avid tourists and to those, who just plan to go to the far countries. Any country you will come, you everywhere will be surrounded by the history. Any construction, any item, remained until our time, has its own historical value. And more ancient is an item – more people's attention it attracts. That's why acquaintance with the history – it is a very interesting process. But today it is well known that among so called antiquities there are a lot of fakes. Many people think that there could be fake coins, sculptures, documents. But few people know that there could be fakes among archeological monuments. Some of them are even announced the universal historical legacy. That's why as grander is the fake, so it is easier to convince people in its authenticity. This film will tell, who, when and what for actually built the three legendary archeological monuments: the tomb of Tutankhamen, legendary Troy and the Great Chinese Wall.

The epoch of Ivan the Terrible – it is the time of the prosperity of the Russian Empire, triumph of the Russian arms and Orthodox faith. At that epoch Russia reached its highest development, and the great Russian tsar Ivan the Terrible became for people a symbol of struggle with external and internal enemies. But during more than two hundred years an absolutely different image of Ivan the Terrible is imposed to us. In the textbooks and novels, on the pictures and in cinema he is presented as a pathologically cruel and psychically sick tyrant. This film will help the viewer to understand, who and what for created such image of Ivan the Terrible and who was Ivan IV in reality – a bloody monster or a great tsar, who brought Russia at the pick of its power. And also, who hides under the name of Ivan IV the Terrible.

What are the reasons and consequences of the Distemper in Russia? From the generally accepted version of the Russian history it is known that the Distemper in Russia started in 1598 after the death of tsar Fedor Ioanovich, who, as it is considered, had no children. An absence of direct successor became a reason of many years of Distemper in Russia. But there is a different version of those far events, created by the authors of the «New Chronology» Anatoly Fomenko and Gleb Nosovskiy. They suppose that the Distemper started at the epoch of Ivan the Terrible, when power in the country temporarily came to the hands of the clan of Zakharyins-Romanovs. After their temporary fault, Romanovs continued the struggle for power and in 1613 the first Romanov entered the Russian throne. And the two last governors from the generation of Ryurikovs – Boris Godunov and Lzhedmitry – were announced impostors by Romanovs and all the troubles and crimes, which took place in Russia at those times of so called Great Distemper, were imposed on them. This film will tell about the authentic documents and evidences, which deny the version of Romanovs' historians.

The film will tell about a change of the ruling dynasties and its destructive influence on the architectural legacy of the country. As it is known, architectural monuments keep much information about the epoch, to which they are related. Sometimes decorations of the palaces and churches may tell about the time of their creation more than chronicles or state documents. This film will tell about Russian architectural constructions of the XV-XVII centuries, in which the authentic history of the old Russian empire of Ryurik is concluded. With start of the power of the new dynasty of Romanovs the destiny of many of these monuments was solved. After destruction of their political enemies the new governors of Russia started to destroy the history of the ancient culture of the Russian folks. A wave of demolitions covered the country, as a result of which most monuments of the history of «before-Romanovs» epoch was irrevocably lost.

The film tells, how the Russian history was written. Each country has so called official history. Russia also has it. The generally accepted version of the Russian history was invented since the beginning of the XVII century after the accession to the throne of the first Romanovs. And in the XVIII century this work was put on a scientific base. Both Russian and foreign historians were occupied in the description of the past in Russia. Each of them had his own attention to Russia and to its history. Each of them gave his own estimation to the Russian state and its governors. That's why, reading and comparing the works of different authors, one can understand that this was not the authentic past of Russia, but just different historical versions. And as a result our knowledge and understanding of the Russian history depends on the authors, who we read. More precisely, what authors are imposed to us since childhood. This film will tell about those, who invented the official version of the Russian history, and about those, who implanted it in the minds of the Russian folk.

The film will answer on the questions about the existence of the world empire, and what happened in reality: reformation or split of the empire. In the XVI-XVII centuries, at the time of creation of the traditional version of history, scientists-historians invented many empires, which allegedly existed in the past. But many studies say that actually during the whole history of the mankind there was only one world empire – the Russian-Hordian. The followers of the traditional historical school argue: if such empire had really existed, then its fall would have been a global event of its time, which simply couldn't not remain on the pages of the chronicles, but allegedly neither Russian nor European documents say about such event. In fact it is wrong. In the history the fall of the Russian-Hordian empire is described in detail, but under the different name – the European Reformation.

The film will tell about the results of events, which took place in Europe in the XVI-XVII centuries at the time of split of the world empire. After a raw of wars and rebels, which were indicated in the history as Reformation, many new independent states appeared on the territory of the Russian-Hordian empire. But an authentic picture of these events was in a wrong way s by historians of the Scaligerian school, or intentionally hid from the future generations. And a bright example of this is destruction of Cathari in the Western Europe and the war of Romanovs with Stepan Razin, and then with Emelian Pugachev in Russia. And the movement of Cathari, and the rebel of Razin and Pugachev were a widespread war of the devoted soldiers of the Empire against rebels-reformers, who captured thrones in all the countries of Europe.

Etrurians are Russians? In the film scientists open a miracle of the ancient Etrurians. Each, who is interested in the history, knows that until now there are many unsolved historical and chronological riddles in the world. One of them is the riddle of the ancient Etrurians. It is considered that this folk appeared in Italy in the VII century B.C. that is before the foundation of Rome. Then it disappeared in a mysterious way, leaving many monuments, covered with odd writings, which the scientists until now can't decode, that's why an expression «the Etrurian is unreadable» became popular. But why they are so sure in it? Probably these ancient signs keep some miracle, which seriously confuses and even frightens the historians. Russian and Italian scientists, who have different points of view on the culture and origin of the Etrurians, participate in the film.

This film is the fall of the myth about the Roman antiquities. It is devoted to several sensational openings, made by the
Russian and Italian scientists. Who of us didn't read the legends and myths of the ancient world in childhood? And these were not just interesting stories for the extracurricular reading. The legendary past of the Ancient Greece and the Ancient Rome takes many pages in the school textbooks on history. As starting from the XVIII century knowledge of so called antique history became a measure of the education of a person. That's why already not for one century pupils learn the names of the Roman gods and imperators, the dates of the grate Roman battles and the years of construction of the great buildings, dreaming to see the Forum, the Coliseum, the Column of Trajan and the Capitoline Wolf. But the results of the modern studies of the antique monuments often fully destroy a myth about the unreal antiquity of the monuments and the whole history of Ancient Rome.