Myths about Heracles are legends about Andronicus-Christ, written in the XVI century 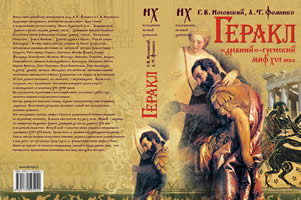 All the results, stated in the book are new and are published for the first time. It appears that, "antique" life story of the famous hero Heracles consists of the data about imperator Andronicus-Christ (Andrew the Pious) from the XII century, and also from description of the events of the XIV-XVI centuries. In the famous 12 Labours of Heracles a description of the placement of planets by constellations of zodiac was found. So, probably, the date of composing of the life story of Heracles was codified. There was the only astronomical solution: November 17-20, 1513 A.D. The life story of the famous "antique" hero Theseus is also one of the variants of "biography" of Andronicus-Christ.

Chapter 1.
"HERACLES IS A REFLECTION OF ANDRONICUS-CHRIST.
1. Virgin Birth, Caesarean operation, the birth of Heracles.

2. Youth of Heracles. Attack of the bad tsar Herod-Judas in the view if snakes. Runaway of the Holy Family to Egypt.

3. Talents of Heracles and his tallness.

4. One more mentioning of beating of the Bethlehem infants.

5. Heracles in a lion fell as a reflection of John the Baptist.

6. Next follow the knightly labours of Heracles and his coevals. Opening and colonization of America by Columbus (that is by Russia-Horde and Osmans=atamans) is described in the "ancient"-Greek tales.

7. When and why tsar Midas turned everything into gold? It appears that it took place in the XVI-XVII centuries, in Moscowia.

8. The "ass's ears" of tsar Midas – this is a reflection of the story of False Dmitry of the beginning of the XVII century in Russia.

9. Deianira, a wife of Heracles, is a reflection of Judas Iscariot. A collusion of Deianira and centaur Nessus against Heracles-Christ.

11. Peter the Apostle in the myth of Heracles.

12. Resurrection of Heracles and Ascention into heaven.

13. Descending of Heracles to the hell.

14. Blind and then seeing the light centurion Longinus in the myth about Heracles.

Chapter 2.
THE FAMOUS TWELVE LABOURS OF HERACLES – THESE ARE TWELVE CONSTELLATIONS OF ZODIAC WITH SEVEN PLANETS. THIS HOROSCOPE IS DATED WITH 1513.

0. An order of the labours is not important for us. The labours of Heracles and spear runnings of the Middle Ages.

2. The second labour - the Learnean Hydra - this is Cancer.

3. The third labour - the Cerynitian Deer - this is Goat.

4. The fourth labour - The Erymanthian Boar - this is Archer.

5. The fifth labour - the Stables of King Augeias - this is Aquarius.

6. The sixth labour - the Stymphalian Birds - this is Libra.

7. The seventh labour - the Cretan Bull - this is Taurean.

8. The eighth labour – the Fillies of Diomed - this is Great Bear and Little Bear near the North Pole.

9. The ninth labour - The Girdle of Hyppolita - this is Virgo.

11. The eleventh labour – the apples or sheep of Hesperides - these are two neighbor constellations: Aries and Pisces.

12. The twentieth labour – the captivity of Cerberus - this is Scorpio.

13. Result: "Zodiac of the labours of Heracles".

14. It appears that in the Zodiac of the labours of Heracles there is a horoscope.

15. Results of decoding: the resulting horoscope of the labours of Heracles.

17. In the "antique" horoscope of the labours of Heracles, probably, was written the date of accession to the throne of the Roman pope-humanist Leo X.

19. Other, "not numerated", labours of Heracles.

20. Why Christ was sometimes expressed as a woman? For example, Heracles "became a woman", also, tsarina Omphal for some reason looked like Heracles.

22. God Bacchus as a reflection of Andronicus-Christ.

Chapter 3.
"ANTIQUE" THESEUS – THIS IS ON MORE REFLECTION OF ANDRONICUS-CHRIST.

1. Virgin Birth and birth of Theseus-Teos.

2. Youth of Theseus "was clued" with his last days. Crucifixion-anvil. Moved tombstone.

4. Rebel against the tsar. An arch traitor. The death of Theseus and the death of Andronicus-Christ. Ascension to heaven.

5. Descent to the hell. Hurts and torn off part of the body

6. "The tomb" of Theseus and his tallness.

1. Chrisopol = the City of Christ on the Asian bank of Bosporus, is placed not far from Tsar-Grad, mountain Beykoz = Calvary and the city of Jeros = Jerusalem.

2. Italian zodiac of Ferrara dukes d'Este was made at the end of the seventeenth century, not in the fifteenth.
2.3. ADDER ON THE HAND OF SATURN – THIS IS THE COMET OF SCHWASSMANN-WACHMANN, WHICH SHONE IN MAY OF 1680 AS A FIRST MAGNITUDE STAR IN THE CONSTELLATION OF WHALE NEAR TAUREAN. PROBABLY IT WAS A REASON FOR CREATION OF THE FERRARIAN ZODIAC.

3. French zodiac of Henry II and Diana Poitier was created in the middle of the sixteenth century.

4. Italian zodiac with Uranium in the Palace of Court in Padua was created at the end of the eighteenth century.

5. A list of found by us 70 reflections of Andronicus-Christ (Andrew the Pious) in the Scaligerian version of history.

6. Once again about the fact that the imperial capital – Moscow of the XVI вcentury – originated the famous "antique" legends about the tower of Babel and Labyrinth.