It has been published in Spanish, the book titled:

The chronological way: Based on the New Chronology of Fomenko and Nosovskiy, and on the X-185 timeline 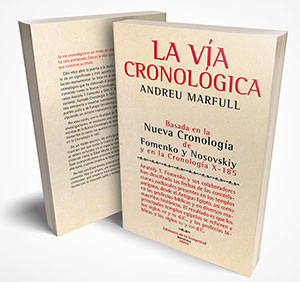 Anatoly T. Fomenko and his collaborators have deciphered the dates of the zodiacal constellations present in ancient temples, from Ancient Egypt, as well as in Biblical prophecies and in various historical manuscripts. The result is that the main Egyptian temples refer to the 12th to 15th centuries AD, and the Biblical prophecies refer to the 15th and 16th centuries AD.

The chronological route is a way of delving into a reality that has been taken from us. This is the idea that embraces this book, and the message that contains its title.

This work opens the door to the doubt of the veracity of history, gives it a meaning and it points to an unquestionable monumental manipulation. It is based on the temporal compression of the chronological map produced by the scientific research project known as the New Chronology, led by Russian mathematicians Anatoly T. Fomenko and Gleb V. Nosovskiy. But it introduces a variant, called X-185 timeline, that complements it. This line interprets and solves central questions for the stories of the Jewish people and of Western Europe that the New Chronology treats following an exploratory criterion that can be developed.

For this reason, in order to facilitate the debate between the two investigations, an exhaustive synthesis of the foundations of the New Chronology of Fomenko and Nosovskiy is incorporated, and, in addition, the reason, the points in common and the results obtained in the X-185 timeline.

In a succinct way, the main results of this reconstruction are that both the official history and the sacred texts ought to be understood in the temporal space that common sense understands as the Middle Ages, and it ends in the 17th century. Everything that happened until then must be questioned. It is in the 17th century that European colonial hegemony begins, not before.
There is no millennial Middle Ages between Antiquity and the Renaissance. There is an origin, an evolution and various crises in the civilizing process, which began a thousand years ago in Egypt, and is transformed with the Jewish and Mongolian incursion.

The scientific doubt that falls on traditional dating methods

PART ONE: THE MANIPULATION

How and when to understand the Spanish Golden Age

The historical journey of criticism of the chronological map

The invention of the past

The case of the Hispanic Era

The modern origin of the Italian Roman Empire

The case of the Spanish documentary forgery

Academic contempt for his own work

The archaeological forgery of the 19th and 20th centuries

The alteration of historical consciousness

The fantasy generated by a long human history

Towards a new chronological paradigm

The problem of positivist historicism

Written history is a molded narrative, but is hardly recognized

The (subtle) critique of historicism

The contribution of Karl Marx

The violence of historical unconsciousness

How to understand the reading of a double interpretation

The New Chronology of Fomenko and Nosovskiy

What is the New Chronology

How to approach the reconstruction of global history

The origin of the New Chronology

The scientific basis of the New Chronology

Dating methods based on Astronomy analysis

Dating methods based on statistical analysis

The main axes of the construction of history, and its subsequent reconstruction

The communion of the pyramids of Egypt, Eurasia and America

The history of religions

The sacred texts of the original story

Origin of the X-185 timeline

The meaning of Christ

The great biblical and medieval struggle, Jewish, Tatar and Mongolian

The great parable of History

Preface 1: The Egyptian Tales and the Mystery of Tutankhamun

The tale of Setme II

The identity of the author of the manuscript

The owner of the manuscript

The sections of the manuscript

Evidence of the invention of the history of the Aragon Crown

The eastern powers of Alba and Portugal, Castile, Galicia, Biscay and half of Europe

Prester John and a marriage

The tomb of Saint Thomas, Genghis Khan or Alexander the Great

The marriage of an Indian princess with a Christian religious, from "royal blood"

The Ark of the Covenant

The Holy Sepulcher of Jerusalem

From inter-religious disputes to the Messianic Christ

The discovery of America

Reconstruction of the hidden reasons of colonial history

The transition of powers from the East to Europe

The mutation of Russia

The mutation of Spain

The archival and documentary mutation

Annex 1. Tables of genealogical equivalences of the New Chronology of Fomenko and Nosovskiy

Annex 2. Charts of the New Chronology of Fomenko and Nosovskiy