Tartar and Arabic languages in Russia. Yaroslavl as Novgorod the Great. An ancient English history - a reflection of the Byzantine and the Horde. 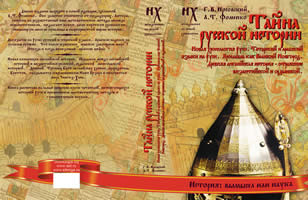 ABSTRACT to the book "THE MIRACLE OF RUSSIAN HISTORY"

The present book is issued in a new edition, made by A.T.Fomenko. It considerably differs from the previous ones. The authors, resting on the developed by them mathematical methods of analysis of the primary sources, propose a new, shorter chronology, putting off many problems in the generally accepted version of the history.
Bilingualism in Russia: Russian and Turkic languages. Arabic signatures on Russian arms. What is the famous "Arabic conquest of the world"? From where and when appeared the "Arabic figures"?
New concept of the English history. Parallels between the English and the Byzantine-Roman, Horde "Mongol" histories. It appears that "ancient" Trojan Brute of the English chronicles, ancestor of Britons, was a coeval of Julius Caesar and the conqueror of the world Genghis Khan.
The book is aimed for the widest circles of readers, interested in the history of Russia and application of mathematical methods in humanities.

2. Arabic signature on Russian miter, a contribution of princes Mstislavskiye.

3. In Russian church language of the XVI and even XVII centuries the word Allah (God) and the quotes from Koran were used.

5. The origin of Arabic figures from the Slavonic-Greek figures-letters in the XV-XVI centuries A.D.

6. How people had been writing in Russia before the XVII century. A hardly readable signature on the Zvenigorod bell, announced today "a cryptogram".

7. How people had been writing in Europe before the XVII century. So called "European cryptography".

1. Once again about Yaroslavl as Novgorod the Great.

3. Horde is a Slavonic Rada, which is a council, or a Cossack Horde.

5. Destruction of the signatures on the ancient monuments of Russia.

6. Faked by Romanovs in the XVII century sarcophaguses of Russian tsarinas before the Romanovs epoch.

7. At the second half of the XVII century Romanovs cleared Russian burying-grounds from the old headstones, which were destroyed or used in construction. Diggings of 1999-2000 in Luzhnetsky monastery in Mozhaysk.

9. А.I.Sulakadzev and his famous collection of books and manuscripts.

10. What was the name of the winner in the battle with tartars in Czechia in 1241.

11. Which Mongolia was visited by a famous traveler Plano Carpini.

12. Written with Russian letters notes of a medieval Turkish janissary.

14. Modern Astrakhan is placed not at the site of the ancient Tartar Astrakhan, which, as appeared, was levelled to the ground by Romanovs.

15. Why the Romanovs' administration destroyed hundreds of maps of a Russian map-maker Ivan Kirillov.

18. When most of the modern Eurasian capitals were founded.

19. How an image of Saint George appeared on the Russian emblem.

20. What really meant the signatures on the old Russian "Mongol" emblem. How Romanovs tried to hide it.

21. On the old emblem of Yaroslavl a bear was keeping a Cossacks' boncuk with Osman half-moon. Until the seventeenth century such boncuk served as a symbol of power all over Europe.

22. "The Ancient Olympus" and Russia-Horde of the XIV-XVI centuries.

23. How some German authors of the XVII-XVIII centuries imagined the universal history. The book of Johannes Heinrich Drimmel.

24. Two-headed eagle of the Empire. How and from where could appear such symbol.

25. Once again written in the XVII century family tree of the Great Moscow princes.

27. How the Romanovs' falsification of the documents reflected in the history of Russian handwriting.

28. An example of open falsification of the old Russian document - the tsar letter missive of Ivan the Terrible.

29. Notwithstanding all the efforts, historians didn't manage to hide that before Romanovs the Moscow tsars were everywhere called the Great Imperators.

30. How Russian nobility of the XVIII century reacted on the implemented at that time in Russia Scaligerian version of the "antique" history.

31. In what a furious struggle the Miller-Romanovs version of the Russian history was implemented in the Russian society of the XVIII century. Lomonosov and Miller.

32. A question about the authenticity of the published "Russian History" of Lomonosov. Lomonosov or Miller?

33. Eyewitnesses of the Russian events of the XVI century placed Novgorod the Great on the river Volga.

34. The Alexander settlement as the capital of Russia-Horde in the XVI century.

35. A fake signature on the portrait allegedly of Ivan the Terrible, dated with the XVII century. Name of the tsar was falsified.

36. A signature on the cloke neckpiece of the XVI century with a falsified name of the Russian tsar.

37. Wonderful Russian-Biblical plots, occasionally kept on the frescoes of the XVI century in Pokrovskaya church of the Alexander Settlement.

38. Why megalithic palaces and churches were more widespread in the South countries, than in the midland countries.

39. The patriarch of Jerusalem gave to Charles the Great a cross with a Slavonic signature.

41. The famous Hun Attila was a coeval of the famous Russian prince Vladimir. So say the medieval German books.
In the Scaligerian chronology this is absolutely impossible.

42. A seal as a sign of the authenticity of the medieval tsar documents.

44. Russian palace and eastern harem – it is the same.

45. Interesting names on the old maps of Russia, contradicting with the Scaligerian version of the history.

47. The Western-European cathedrals brought to us an old look of the Russian churches of the XV-XVI centuries.

48. Organs of the Western-European cathedrals brought to us an old musical culture of Russia-Horde of the XV-XVI centuries.

2. How the Scaligerian chronology of the English history looks like.

Chapter 4. PARALLELS BETWEEN THE ENGLISH HISTORY AND THE BYZANTINE-ROMAN HISTORY.

1. A rough comparison of dynastical flows of England and Rome-Byzantium.

3. A table of dynastical parallelism.

Chapter 5. SHORTENING AND SATURATION OF THE ENGLISH HISTORY.

1. Our concept of the English history.

2. How byzantine and "Mongol" chronicles turned out to be included into the English history.

Chapter 6. NEVERTHELESS THE EFFORTS OF FALSIFICATORS OF THE XVII-XVIII CENTURIES, THE ENGLISH CHRONICLES KEPT MUCH INFORMATION ABOUT THE AUTHENTIC EVENTS OF THE XI-XVI CENTURIES. ENGLAND AND RUSSIA-HORDE.

1. "Antique" Roman consul Brute – the first Roman, who conquered Britain, at the same time, was the first "very old" Trojan, the King of Britons.

2. "Ancient" Trojan Brute of the English chronicles, ancestor of Britons, was a coeval of Julius Caesar and the conqueror of the world Genghis Khan.

3. Biblical events on the pages of the English chronicles.

5. Why, according to the opinion of English chronicles, Russia and England were located on the islands.

6. Where was located that Britain, which was conquered by Brute. Where his fleet was sailing.

8. Julius Caesar at the conquests of Britain = Albania turned out to be near Russian lands.

9. Where London was located in the X-XII centuries. When a city named London appeared on the British Islands.

10. On the old emblem of the English kingdom of Eastern Saxons and London the Osman yataghans or half-moons were placed.

11. Who are Scots in the XIII-XIV centuries and in which Scotland they lived at that time. Appearance of the name Russia = Scotland on the medieval maps of England, starting from the XV-XVI centuries.

12. Five primary languages of ancient Britain. Which nations spoke them, and where these nations lived in the XI-XIV centuries.

14. A famous English king Arthur – it is, in particular, a reflection of the Horde, which made an incursion on the British Islands in the XIV-XVI centuries.

15. William the Conqueror and the battle of Hastings allegedly in 1066. The fourth Crusade of 1204.

16. Medieval Russia-Horde on the pages of the latest English chronicles. When and to which Galatians Paul the Apostle addressed his message.

17. When the maps of Matthew of Paris were created. When and why Scythia-Horde was called "a mother of dragons, nursery of scorpions, hothouse of snakes, source of demons".

Chapter 7. CHRONOLOGY OF ROME AND BYZANTIUM. A PROBLEM OF RECONSTRUCTION OF THE CORRECT HISTORY.

1. Structure of a modern "textbook on history".

2. A principle of fairness of the "common sites" in old documents.

3. A principle of geographical localization of the Ancient events according to the maps of the XVII-XVIII centuries.

4. A principle of determination of the ancientry of a text according to the time of its first mass copying.

1. World wars at the epoch before the XVII century.

2. What we know today about the XII century – the epoch of Christ.

1. The history of religions.

3. Newsletters of the Russian chronicles about the end of the XII century.