G.V.Nosovskiy, A.T.Fomenko
SPLIT OF THE EMPIRE From Ivan the Terrible-Nero to Michael Romanov-Domitian.
It appeared that the famous "ancient" works of Suetonius, Tacitus and Flavius describe the Great Russian Empire
and rebellion of the Reformation of the XVI-XVII centuries. 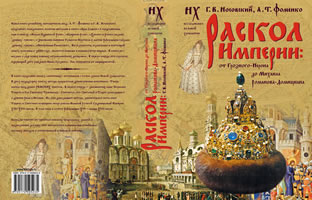 Foreword. ANTIQUE SOURCES TELL US A LOT OF NEW AND UNEXPECTED THINGS ABOUT THE EVENTS OF THE XVI-XVII CENTURIES.

Chapter 1. ANTIQUE ROMAN IMPERATORS TIBERIUS, CALIGULA, CLAUDIUS, NERO – THESE ARE REFLECTIONS OF THE FOUR HORDE TSARS-KHANS, UNITED IN THE RUSSIAN HISTORY UNDER THE NAME OF IVAN THE TERRIBLE.

Chapter 2. NERO – THIS IS IVAN THE TERRIBLE.

1. A carrot beard of Nero and Ivan the Terrible, and also the name: Friedrich Barbarossa.
2. Dark signs at the time of birth of Nero and Ivan the Terrible.
3. Early death of father. Tutorship of the infant governor.
4. Murder of Agrippina – this is the governance of Elena Glinskaya.
5. Nero kills his aunt Domitia Lepida, and Ivan the Terrible kills his aunt Euphrosyne.
6. Nero killed his brother Britannic, and Ivan the Terrible killed his cousin Vladimir.
7. Both tsars came to power in sixteen-seventeen years.
8. The story of Esther in the life story of Nero.
9. Increase of the influence of the associates of Esther. Then fall and death of heretics and Esther herself.
10. Penitence of Nero and return of the previous wife. Oprichnina, defeat of the Persians, the Judaic holiday Purim.
11. The punishment of Octavia – this is the punishment of Esther. Also the punishment of Mary Stewart is well known.
12. The famous English queen Elizabeth is a reflection of Sophia Paleolog. She was a wife of Ivan the Terrible.
13. Repeat of the story of Esther in the life story of Nero as a tale about Biblical Susanna.
14. The capture of Kazan and the capture of antique Artaxata. The Roman Corbulo – this is prince Kurbskiy.
15. The fire in Rome due to Nero – this is the fire in Moscow or Novgorod due to Ivan the Terrible.
16. Monster Nero and Monster Ivan the Terrible.
17. Persecution of Christians at the time of Nero and struggle of the Christians with the heresy of Judaizes at the time of Ivan the Terrible.
18. Blessed Nero and St. Basil – this is tsar Ivan IV.
19. Unsuccessful Livonian war, the treason of prince Kurbsky and the treason of antique Vindex.
20. The death of Nero and the death of Holofernes, an Assyrian commander.
21. The famous antique flight of Icarus – this is the flight of aeronaut Nikita, the son of Trofim, at the time of tsar Ivan the Terrible = Nero.
21.3. THE FLIGHT OF VILLAIN NIKITA = I�ARUS AT THE TIME OF IVAN THE TERRIBLE = NERO IN THE ALEXANDROVSKAYA SETTLEMENT.
21.4. "ANTIQUE" PASIPHAE – THIS IS SOPHIA PALEOLOG, A WIFE OF IVAN THE TERRIBLE = NERO.
21.7. IT COULD BE THAT ICARUS-NIKITA ROSE TO THE SKY FROM THE CHURCH OF ASCENSION IN KOLOMENSKOYE. PROBABLY AT THE TIME OF IVAN THE TERRIBLE THERE WERE SEVERAL SUCH FLIGHTS, DEPICTING THE ASCENSION OF CHRIST
22. How the daily life of the tsar court of Ivan the Terrible = Nero was arranged. Astonishing luxury.
23. Fake-Neros – these are fake Dmitrys.
24. We found a zodiac on the throne of Ivan the Terrible. It appears that Ivan IV was born on February 9, 1526, that is four years earlier than it is considered today.
24.3. THE TSAR WAS BORN FOR YEARS EARLIER THAN THE HISTORIANS SUPPOSE.
25. Birthday of Peter I doesn't correspond to his name, as it was with other Russian tsars of his time. Peter I was called not Peter, but Isaacius? Tsar was replaced?

Chapter 3. TIBERIUS AND IVAN THE TERRIBLE.

1. The story of Esther.
2. The struggle of Ivan the Terrible with his aunt Euphrosyne.
3. Monster.
4. The blessed, which left the governance.
5. Allegedly of his own free will gave the power to Simeon Bekbulatovich.
6. Mailing with prince Kurbskiy.
7. Death.
8. Showed his treasures before the death.
9. Destruction of the big temple at the death of Samson-Zemshchina at the epoch of Ivan the Terrible and catastrophic collapse of the amphitheater at the time of Tiberius.
10. Christ and Phoenix. Tacitus tells the date of birth of Phoenix.
11. Writer's hobbies of Tiberius and Ivan the Terrible. An allegedly literal pseudonym: Parthenius the Fool.
12. Once again about the death of Tiberius. In 1553 Ivan the Terrible nearly died, but suddenly has felt well.
13. The works of Josephus Flavius – these are laminated chronicles. In particular, some events from the XII and the XVI centuries are glued.

Chapter 4. COMANDER GERMANICUS, A NEPREW OF TIBERIUS, - THIS IS A COSSACK ATAMAN- CONQUISTADOR ERMAK-CORTES, WHO CONQUERED AMERICA.

Chapter 5. CALIGULA AND IVAN THE TERRIBLE.

1. Young Caligula replaces Tiberius at the throne.
2. Capture of Kazan and construction of the bridge across Hellespont.
3. Struggle against a powerful relative.
4. Traces of the story of Esther in the biography of Caligula.
5. The blessed, mad Caligula.
6. What horse imperator Caligula brought to the Senate? Answer: Russian-Horde khan Simeon Bekbulatovich.
7. Fanatic cruelty.
8. Alexandrovskaya settlement, oprichnina and necrology of Ivan the Terrible on the pages of Suetonius.
9. Caligula as a writer.
10. The death of Caligula, the death of Holofernes from the hand of Judith and the murder of tsarevich Dmitry.
11. The death of Caligula and the death of tsarevich Dmitry.
12. Fake Dmitrys in Russia and antique rumors that imperator Caligula didn't die, but got off and spoke with people.
13. The death of Elena Voloshanka that is Esther = Judith and the death of old woman Kherea – one more her antique reflection.

Chapter 6. CLAUDIUS AND IVAN THE TERRIBLE.

1. Childhood and tutorship.
2. Taking power by Claudius was absolutely unexpected for himself. A reflection of Simeon Bekbulatovich.
3. The capture of Kazan by Ivan the Terrible was reflected in the antique biography of Claudius as a battle on the Fucinian lake.
4. Idiocy of Claudius.
5. The famous codding Messalina, a wife of Claudius, is a reflection of Elena Voloshanka that is Esther.
5.3. A POWERFUL COURTIER TRIES TO STOP A WOMAN-INTRIGUANTE, WHO INDUCED DISTEMPER IN THE STATE.
6. Two famous women: antique Messalina and Mary Stewart.
6.4. DISGRACE OF UNGOVERNABLE TSARINA AND DOUBTS OF THE GOVERNOR, WISHING AND AT THE SAME TIME NOT WISHING HER EXECUTION. A POWERFUL COURTIER AGAINST A DISGRACED TSARINA.
7. Antique Corbulo – this is prince Andrey Kurbskiy. Correspondence with Claudius – Ivan the Terrible.
8. Many wives of Ivan the Terrible and many wives of Claudius. Each next wedding of the imperator happens only after approval of the Synod-Senate.
9. The death of a boy Drusus, a son of Claudius, - this is the death of tsarevich Dmitry, the son of Ivan the Terrible.
10. Claudius – a monster, cruel tsar.
11. Mentioning of Christ.
12. Claudius = Ivan the Terrible was a writer. It appeared that the first variant of the famous Illuminated Compiled Chronicle was created at his time.
13. The death of Ivan the Terrible, like the death of Claudius, was annunciated by a comet.
14. Why Claudius was poisoned with white mushrooms? Answer: because Ivan the Terrible was poisoned by boyar Belskiy.
15. The famous antique Pharos sea-light – this is the famous Bell tower of Ivan the Great in Moscow.
15.5. THE OCTAL PHOROS SEA-LIGHT AND THE OCTAL PILLAR OF IVAN THE GREAT. SECURITY INSIDE THE TOWER.
16. Now we learn a lot of new about tsar Ivan the Terrible when opening antique sources.

Chapter 7. GALBA – THIS IS A REFLECTION OF TSAR SIMEON AND TSAREVICH DMITRY. HERE ANTIQUE CLASSICS DESCRIBE THE EPOCH OF FEDOR IOANNOVICH.

Chapter 8. PROXIMITY OF THE GREAT DISTEMPER IN RUSSIA. ANTIQUE OTHON – THIS IS BORIS GODUNOV.

1. Allegedly bad origin of Boris Godunov and allegedly low origin of the great grandmother of imperator Othon, �nd that's why his also.
2. From the other side, there is data about a noble origin of Othon.
3. Othon comes to power with the help of a woman, and Godunov – with the help of Irina, allegedly his sister.
4. Crafty Othon and crafty Godunov find their way to power.
5. Othon kills Galba and Godunov kills Dmitry.
6. Godunov - Othon allegedly insistently refused the throne and changed his decision only under unreal pressure of the suite and folks.
7. Godunov - Othon sees terrible visions, related to the murder of tsarevich or tsar.
8. Appearance of Fake Dmitry = Vitellius.
9. Appearance of three Impostors, three Fake Neros. These are three Fake Dmitrys in Russia-Horde of the end of XVI – beginning of XVII century.
10. Defeat of Godunov - Othon in the struggle with Fake Dmitry -Vitellius.
11. Death of Godunov - Othon.
12. Now we learn a lot of new about tsarevich Dmitry, Simeon Bekbulatovich and Boris Godunov.

Chapter 9. NEXT TACITUS AND SUETONIUS DESCRIBE THE BEGINNING OF THE GREAT DISTEMPER IN RUSSIA AND IN THE WHOLE EMPIRE. VITELLIUS – IT IS THE FIRST FAKE DMITRY.

Chapter 10. VESPASIANUS – THIS IS VASILY SHUYSKIY. THE GREAT DISTEMPER.

1. Young Titus, a son of Vespasianus is an outstanding commander. Young Skopin-Shuyskiy, a nephew of Vasily Shuyskiy, is a famous commander.
2. Intrigues against a young commander from the side of his brother-co-governor or uncle-tsar or brother of tsar.
3. Titus = Skopin was suspected in his will to capture the power at the presence of healthy tsar. In fact there was nothing like this.
4. Unexpected death of an outstanding hero: Skopin =
Titus.
5. Moscow of the end of XVI – beginning of XVII is described by Joseph Flavius as Jerusalem
5.3. THE BELL TOWER OF IVAN THE GREAT AND THE CATHEDRAL OF THE DORMITION IN THE MOSCOW CREMLIN ON THE PAGES OF JOSEPH FLAVIUS.
6. The capture of Moscow in 1610 by Skopin-Shuyskiy, and then, in 1612 by Minin and Pozharskiy.
7. The capture of Jerusalem by antique imperator Titus – this is the capture of Moscow at the beginning of the XVII century.
8. An interesting picture of Nicolas Poussin: Destruction of a church in Jerusalem by Titus.
9. Restoration of Jerusalem-Moscow.
10. The famous Judaic war, described by Josephus Flavius, - these are the wars of the Great Distemper and Reformation in Russia and Europe of the beginning of the XVII century.
11. Finishing the story about the Great Distemper of the XVII century, Josephus Flavius skips back to the end of XII – beginning of XIII century. That is to the execution of Andronicus-Christ and the following campaign-revenging of Horde on Tsar-Grad.

1. Traces of the life story of Fake Dmitry II in the antique biography of imperator Domitian.
2. The story of Ivan Susanin in the life story of antique Domitian, who is Michael Romanov.
2.3. "THE FIRST PART" OF DOMITIAN – THIS IS MAINLY MICHAEL ROMANOV, AND "THE FIRST PART" OF SABIN – THIS IS IVAN SUSANIN + BOGDAN SABININ.
3. The second part of Domitian – this is tsar Herod + Andronicus-Christ (that is Andrew the Pois).
3.3. THE DEATH OF DOMITIAN – THIS IS THE PUNISHMENT OF ANDRONICUS-CHRIST, WHO IS ANDREW THE POIS.
3.4. WHY DOMITIAN WAS BURRIED AS A "GLADIATOR"? FROM WHERE DID THE GLADIATOR'S GAMES APPEAR?
4. The word Gladiator initially meant Crusader = Chrisader. Gladiator's Games in the antique circuses-churches – these were religious performances in memory of the Trojan war, which is the Crusade of Russia-Horde, which was a revenge for the crucifixion of Christ.
5. Coins.
6. Result: what new did we learn about the history of the XVI-XVII centuries from the antique sources.