The Great Empire of the XIV-XVII centuries on the pages of the Bible. Russia-Horde and Osmania-Atamania – the two wings of the united Empire. The Biblical campaign of Moses – it is the Osman conquest. Biblical Esther and Judith lived in the XVI century.
Volume 6, book 1 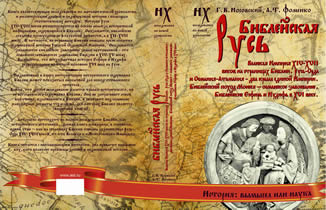 1. The absence of vocalizations in the ancient texts sometimes lead to a mess.

2. The argues about the Biblical date of "creation of the world" didn't stop until the middle of the eighteenth century.

3. In the XVII-XVIII centuries many people imagined the Russian and global history in a different way.

4. Statistical parallelism between the events, described in the Bible, and the events of medieval Europe and Asia.

5. How far to the past one can descend with small steps on the stairs of stepped chronicles.

Chapter 2.
THE HISTORY OF MANUSCRIPTS AND EDITIONS OF THE BIBLE.

1. What is Biblical canon? Why in the Middle Ages the church forbid laymen to read the Bible?

2. Manuscripts of the Bible.

3. The first printed editions of the Bible.

Chapter 3.
EVENTS OF THE XII CENTURY A.D. IN THE NEW TESTAMENT. THE WORSHIP OF WISEMEN AND THE CHRISTIANIZATION OF RUSSIA.

1. A golden sarcophagus with the hallows of three evangelic Wisemen in the Cologne Cathedral.

2. Why today in the Scaligerian version of history the names of three Wisemen-tsars are kept in secret?

3. Wiseman-Magician Valta-Tsar – a hero of both Old and New Testaments.

4. Other pictures of the Wisemen in the Cologne Cathedral, European churches and medieval painting.

5. Why on the sarcophagus of Wisemen and on some other ancient pictures the famous tsar Solomon was presented as a woman?

6. The figure of Biblical Aaron – patriarch with female body.

7. The crucifixion of Hero in the Cologne Cathedral.

8. Russia-Scythia in the New Testament.

10. Why and when the name of tsar Herod appeared in the Gospels.

11. Why the hallows of Wisemen stay exactly in Cologne?

12. Infant Jesus Christ accepted the worship of Wisemen under the flags with half-moons and stars.

13. The gifts of Wisemen until now are kept on the Holy Mountain Athos.

1. A general view on the history of Biblical outcome. Great Egypt of the Bible.

2. What lands were conquered by the army of Moses? What is Biblical Palestine.

3. The Russian-Hordian history of the fifteenth century. Separation of the Golden Horde.

4. Biblical Egypt of the epoch of outcome – it is Russia-Horde of the first half of the XV century.

5. Beginning of the campaign of Moses.

6. The campaign of Moses. Transmission across the sea.

7. A reflection of the appearance of Islam in the Bible.

8. If the theomachists = Israelites went from Egypt to the Canaan to the North or to the South

9. With what and how struggled the army of theomachists = Israelites. Fire guns and muskets.

11. Where the flag of Moses is kept today?

12. A gun carriage on the Russian emblems.

13. The pictures of guns on the medieval illustrations to the Bible.

15. Huge Russian-Hordian guns of the XVI-XVII centuries with the names and pictures of tsars of "antique" Troy.

16. New inquisition in the counties of the Western Europe on the pages of the Bible.

17. To which countries the army of Moses went.

18. Around which "desert" the knees=columns of Moses went for forty years.

20. From where Osmans=atamans went out, according to the Lutheran chronograph of 1680.

21. Where Moses was buried?

22. Moses on the pages of the Russian history of the XV century.

23. Our reconstruction of the biblical history of Moses. A layer from the XV century.

1. What Navin or Navgin means.

3. Why the walls of Jericho fell. Biblical Jericho – it is Tsar-Grad.

4. The ataman=Osman conquest of the Canaan by Jesus Navin is described on the same way as the conquest of apostle Jacob.

5. The tomb of Jesus or Jesus Navin at the outskirts of Tsar-Grad.

6. Distribution of the conquered lands by Jesus Navin and Alexander the Great.

7. A gem of Jesus Navin and a gem of Alexander the Great.

8. Guns in the troops of Alexander the Great.

9. The hallows of Joseph in the army of the theomachists = Israelites.

10. Separation of the lands, conquered in the XV century by Osmans=atamans. What Russian documents tell about this.

11. If Austrian Vienna was one of the Hordian-Osman capitals of the XVI century?

12. An Osman=Ataman half-moon with a star – under Europe and Asia of the XIV-XVI centuries.

13. Why and how the Osman half-moon was changed in the Western Europe at the epoch of Reformation, having shaded its initial sense.

14. A gift of Alexander the Great = Jesus Navin to the Slavs at the separation of Europe after the Osman=ataman conquest of the XV century.

17. The jubilee tubes in the troops of Moses and the medieval Christian jubilees. "The Common era", which put the Birthday of Christ on zero year, was introduced at the epoch of 1582, that is at the time of the Gregorian Reform.

Chapter 6.
THE HISTORY OF RUSSIA-HORDE OF THE XIV-XVI CENTURIES IN THE LAST CHAPTERS OF THE BOOKS OF TSARDOMS.

2. Assyria-Babylon tsar Nebuchadnezzar – it is Russian tsar Ivan the Terrible.

Chapter 7.
THE RUSSIAN HISTORY OF THE END OF THE XVI CENTURY AND THE BEGINNING OF THE XVII CENTURY ON THE PAGES OF THE BOOK OF ESTHER.

1. A late origin of the book of Esther.

3. A quarrel of Artaxerxes and tsarina Vashti.

4. A choice of the bride for the Persian tsar.

5. A new wife of tsar Artaxerxes – a foreigner Esther.

6. The Judaize heresy of the end of the XV – actually XVI – century in Russia and the evoked by it distemper in the Moscow state.

7. Amman – the main governor at the time of tsar Artaxerxes and an enemy of Marchodey and the Jews. An order of Amman and Artaxerxes.

8. A disposal of the Jews from the punishment thanks to Esther and the death of Amman.

9. The Jews destruct their enemies in Russia-Horde and establish a holiday Purim in honor of this.

10. In which year a Biblical holiday Purim was established.

11. An international Women Day March 8 as a holiday in honor of Esther.

12. The topic of Esther brightly sounded in the European art of the XVII-XIX centuries.

13. Transmission of Moscow into the capital of Russia in the XVI is connected with the events, described in the book of Esther.

14. The victory of Jews. Marchodey becomes a co-ruler of Artaxerxes.

15. Tsar Artaxerxes was also called with the names Asver, Assuer and Assuerus.

17. Why Ivan III had to call for foreigners for construction of the cathedrals of the Moscow Kremlin.

18. The appearance of Russian Bible at the epoch of the Judaize heresy. Who wrote it?

19. What the Biblical book of Esther hided.

20. The Biblical book of Esther about the Russian history of the end of XVI century.

21. The end of oprichnina and the destruction of Zakharyins in the XVI century. Why Romanovs distorted the Russian history in the XVII century.

23. A transmission of the capital of Russia-Horde in Moscow in the middle of the XVI century.

24. Continuation of the history of Esther in the XVII century. The Great Distemper in the Great = "Mongol" Empire.

25. Stepan Timofeevich Razin on the pages of the Bible. A destruction of Russia-Horde.

26. The original of Esther in the Russian history of the XVI century and a number of its bright duplicates in the earlier epochs.

27. The traces of Esther in the Russian history of the beginning of XVII century.

28. The history of Esther, who is Elena Voloshanka, in the description of "antique" Plutarch.

Chapter 8.
THE RUSSIAN HISTORY OF THE END OF XVI CENTURY ON THE PAGES OF THE BOOK OF JUDITH.

1. Short contents of the book of Judith.

2. The war of Assyrian tsar Nebuchadnezzar with tsar Arphaxad – it is the capture of Kazan by Ivan "the Terrible".

3. An attempt of the Western tsars "to deposit" from Nebuchadnezzar – it is Reformation in the Western Europe.

5. Panic in the Western countries after news about the beginning of punishing campaign of Assyria = Russia-Horde.

6. An interruption of the Assyrians to Vetiluya – it is a repeated invasion of the Russians to Lithuania, that is to the Western Europe in the XVI century.

7. An Assyrian, who is Russian commander Olofernes, dies from the hand of woman Judith.

8. Other traces of Biblical Olofernes in the Russian-Lithuanian war of the XVI century.

9. A defeat of Assyria = Russia-Horde at the end of the XVI century.

12. The plots of Judith and Esther reflect, in particular the joy of elaboration of the Western Europe from "the Mongol yoke".

13. A reflection of the history of Esther, that is the Russian history of the XVI century, in the Old Testament book of Judges.

Appendix 1.
THE OLD PICTURES, ON WHICH WISEMAN MELCHIOR WAS A WOMAN.

Appendix 2.
THE CONTENTS OF OLD AND NEW TESTAMENTS ACCORDING TO SLAVONIC "KORMCHAYA BOOK" OF 1620.

Appendix 3.
THE LAST PROPHESY OF DANIEL.

Appendix 4.
THE PHOENICIAN WRITTEN LANGUAGE IN THE MUSLIM WORLD. DECODING OF THE SIGNATURE ON THE TROPHY FLAG OF OSMANS, KEPT IN THE VIENNA MUSEUM.