A unique life story of Mohammed Mohammed. The tables of Moses. The Yaroslavl meteorite of 1421. Appearance of steel. Phaeton 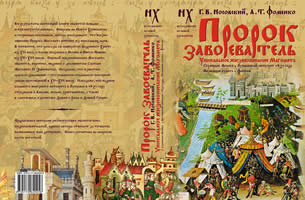 All the results, stated in the book are new and are published for the first time. The authors, resting on the New Chronology and ancient sources, show that the life story of
Prophet Mohammed consists of several layers. In particular, these are the tales about imperator Andronicus-Christ from the XII century, and also tales about Moses and Joshua Ben Nun from the XV-XVI centuries. The base of the life story of Mohammed is, probably, the data about famous Sultan Mohammed II the Conqueror. It appeared that the famous Arabic conquest – this is Osman=ataman conquest of the Canaan in the XV-XVI centuries. It is shown that the fall of big iron meteorite in Yaroslavl in 1421 was reflected in the Bible, Islam, Christianity, and also in "antique heathendom" of Ancient Rome and Ancient Greece. The proposed by authors reconstruction is yet a suppositional, but the authors answer for the accuracy of the calculated by them datings. The book is aimed for a wide circle of readers.

1. The era of Hegira, the Biblical Arch of the Covenant and the Muslim Caaba.

2. Through time the Islam changed considerably until it reached today's form. This happened relatively recently.

4. According to Andrey Lyzlov, Koran included the earlier Christian, Judaic and even heathen, heretical ideas.

Chapter 1. THE TALES ABOUT ANDRONICUS-CHRIST FROM THE XII CENTURY ARE INCLUDED IN THE LIFE STORY OF PROPHET MOHAMMED.

1. The Virgin Birth and the Annunciation.

3. The star of Bethlehem.

4. John the Baptist and Ibn Al-Hayaban.

5. Exile of salesmen from the church and exile of hypocrites from the mosque.

6. Christianization of Paul (Saul) and Islamisation of Umar.

7. Paul was punished, Umar was killed. Writing gift of Paul and Umar.

11. Resurrection from the dead on the third day. The hearse of Mohammed "hung in the air".

13. It appears that Prophet Mohammed was baptized according to the Christian custom – with affusion.

15. Description of Envoy of Allah in the Testament.

17. Where was the tomb of Mohammed?

Chapter 2. THE STORIES OF MOSES AND JOSHUA BEN NUN FROM THE XV-XVI CENTURIES WERE INCLUDED IN THE LIFE STORY OF PROPHET MOHAMMED.

1. Mother gives her son for breeding to another woman, then the infant was returned to his mother, but she gave him back.

2. Moses kills an Egyptian and the pharaoh in revenge wants to kill Moses, but fails. Mohammed is wrongly accused in the murder of Nazarene Sergius. Failed attempt on Prophet Mohammed.

3. Exodus of Moses from Egypt with the Israelites and migration (Hegira) of Mohammed together with his followers from Mecca.

4. Transmission by Mohammed of his capital from Mecca to Medina and transmission of Qibla. Andronicus-Christ, Konstantin the Great and Mohammed II the Conqueror.

5. Start of the hostile actions of the Jews against the Prophet.

6. Exile of hypocrites from the mosque.

8. Preliminarily results: "evangelic layer" in the life story of Mohammed.

9. The great battle of Badra and the victory of Moses under the army of pharaoh.

10. An angel strangled Mohammed with a book (Koran = Revelation). An angel made John the Evangelist eat a book (Revelation). Moses burned his mouth with burning coal.

13. It appears that the Easter should be eaten with horseradish, not with "bitter herbs", as synodal translators of the Bible archly translated

Chapter 3. THE BASE OF THE LIFE STORY OF PROPHET MOHAMMED IS PROBABLY THE DATA ABOUT FAMOUS SULTAN MOHAMMED II THE CONQUEROR. THE FAMOUS ARABIC CONQUEST – THIS IS OSMAN=ATAMAN CONQUEST OF THE CANAAN IN THE XV-XVI CENTURIES.

2. A huge Arabic invasion allegedly of the VII century and the conquest of the Canaan by Osmans=atamans in the XV-XVI centuries.

3. Capture by Prophet Mohammed of the cities of �t-Taif and Tabuk as a reflection of the capture of Tsar-Grad in 1453 by Sultan Mohammed II the Conqueror (Prince Oleg).

6. Struggle of two successors for power.

2. Ivan III and Ivan IV as two partly duplicates in the Russian history. Destruction of Novgorod, capture of Kazan and capture of Tsar-Grad.

3. Poisoning o Ivan the Terrible and poisoning of Mohammed the Conqueror.

4. The poisoned ruler showed or counted his treasures before the death.

5. The ruler asked to tear off the skin from an unfair judge.

6. Sultan Mohammed the Conqueror praised Christianity and wanted to Christianize.

8. Bloody hand of the right arm – an important ancient religious symbol in Islamism.

Chapter 5. A METEORITE, WHICH FELL IN YAROSLAVL IN 1421, REFLECTED IN THE BIBLE, ISLAM, CHRISTIANITY, IN THE "ANTIQUE HEATHENDOM" OF ANCIENT ROME AND ANCIENT GREECE.

3. Fall of the meteorite in Novgorod (that is Yaroslavl) in 1421 is in details described in Russian chronicles. And also, probably, in the Old Testament.

4. Fall of the iron meteorite in "antique" Tsar Rome and use of it for hammer work of arms is described by famous Plutarch.

5. "Ancient"-Syrian (that is Russian), also Damask (that is Moscow) Steel.

6. Mentioning of the iron meteorite, which fall in Russia, in the "ancient"-Greek texts. The "antique" cooper anvil, which fall on the earth and Tartar from heaven.

7. The God-blacksmith Hephaestus-Svarog, who fell from heaven and broke both legs.

8. Iron pincers, which fall from heaven at the time of god-tsar Hephaestus-Svarog, and the ancient settlement Kleshchin not far from Yaroslavl, which then grew into the city of Pereslavl-Zalesskiy. The famous "Blue Stone" in Pereslavl-Zalesskiy, on the bank of the Pleshcheevo lake, - this is "deputy" ancient Kleshchinsky Stone.

9. Stone wreckages are carefully kept in the Muslim Caaba as a memory about the Yaroslavl meteorite.

10. A mass cult of the holy (untreated) stone in the Bible, Islam and Christianity initially appeared, probably, as a worship to iron Yaroslavl meteorite.

11. Mass ancient cult of untreated "blue stones" in Yaroslavl and its suburbs.

12. One more "antique" story about the Yaroslavl meteorite – this is the famous "ancient"-Greek myth about Phaethon, the son of Helios, who fell in the river Eridanus. This means that Phaethon fell in 1421.

13. Astronomical dating of the horoscope, found by us on the ancient bas-relief "fall of Phaethon", well agrees with the fall of the Yaroslavl meteorite on May 19, 1421.

14. "Tears-amber" – this is granulation and filigree. "Bird Swan" – this is Steel. "Wooden bark" – these are armors and hauberks.

15. Phaethon, that is the Yaroslavl meteorite of 1421, was "moved" to the celestial sky and expressed on the "antique" star maps as the famous Charioteer. The river Volga was presented as a constellation Eridan, and Steel – as Cygnus.

16. Once again about Steel and Damask, which came from Russia-Horde.

17. Analysis of the full list of the remained mentionings of meteorite in the Russian chronicles.

18. Peter the Apostle-Stone with the keys from heaven and god Hephaestus-meteorite with the sky pincers. The fall of Phaethon and crucifixion of Peter "headfirst".

19. The Old Testament Prophet Elijah is partly a one more reflection of the Phaethon-Hephaestus-Peter that is the Yaroslavl meteorite of 1421.

20. What is the famous "Golden Calf", poured by Israelites?

21. The Biblical tabernacle, where was the Arc of the Covenant, this is the smithery, where the pieces of the Yaroslavl meteorite were kept in a special box.

1. Aiyub Sultan, a friend and banner-bearer of Prophet Mohammed after allegedly 800 years of oblivion again appears in the story of Sultan Mohammed II the Conqueror.

3. Possible correspondence: caliph Ali = Aiyub Sultan; caliph Moavia = Mohammed the Conqueror; the first Osman caliphate of the Umayyads = the union of Russia-Horde and Turkey-Atamania in the XV-XVI centuries.

4. The tales about Ilya of Murom and Rustam contain memories about caliph Ali.