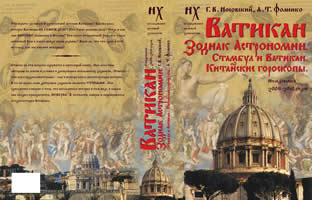 Part 1
Zodiac of the Astronomy

Chapter 1. The zodiac of Astronomy in Vatican, devoted to creation of the Ptolemian system of the world at the time of tsar Ptolemy, he is also imperator Antoninus Pius, he is also he Judaic tsar Hezekiah (zodiac BG)
1.1. The zodiac of Astronomy in the showroom of pope Alexander Borgia (1492-1503) in Vatican
1.2. Shortly about the history of the Vatican palace and the showroom of Borgia.
1.3. The main moments of our reconstruction of the history of Vatican
1.4. The pictures of planets and zodiacal constellations on the zodiac of Astronomy
1.5. Rough horoscope of the zodiac of Astronomy
1.6. List of rough datings
1.7. Many imitations of the zodiac of Astronomy in medieval astronomical works
1.8. Clarifying astronomical data about the zodiac of Astronomy
1.9. Clarified horoscope
1.10. On the zodiac of Astronomy there is a date August 28, 1228 A.D.
1.11. According to the zodiac of Astronomy, the Ptolemian system of the world was created not in the II century A.D., as historians think, but at the end of the XIII century, what fully agrees with the New chronology
1.12. A coeval of Almagest, Roman imperator Antoninus Pius, he is the Judaic tsar Hezekiah, lived in the XIII century A.D.
1.13. Landmarks of correspondence between Antoninus Pius and Hezekiah
1.14. The Ptolemian rate of speed of precession of equinoxes is presented in the Bible as a backward motion of the sun shade on 10 grades, corresponding to 15 years (indiction)
1.15. Antoninus Pius, also Hezekiah, according to the opinion of his courtiers, paid too much for writing of Almagest. Isaiah was not satisfied with such wastage of the tsar
1.16. Chaldean Babylon – this is Egyptian Cairo. Almagest was written by the Chaldean, that is Egyptian astronomers
1.17. Why Ptolemy was so much mistaken in his calculation of the speed of precession of equinoxes
1.18. Dating of the epoch of Hipparchus with the XI century A.D. Anna Komnene about Hipparchus. What the name Hipparchus means?
1.19. Biblical Baruch. Why pope Alexander Borgia was considered "very bad"
1.20. Some Biblical prophets, who deplored Jerusalem, probably, counted years from 7000 of Russian-Byzantian era that is from 1492 A.D.

Chapter 3. On the mosaics of Raphael in the chapel of Chigi of the church of Maria del Popolo in Rome (zodiac ��) a slightly changed zodiac of Astronomy is drown. Astronomically it is written on it: August 23-25, 1785 or August 11-12, 1843
3.1. The church of Maria in poplars (St. Maria del Popolo) in Rome, the chapel of Chigi and the zodiac MP 3.2. The zodiac �� was devoted to the return of the rough horoscope of the zodiac of Astronomy with one small, but important for astronomical dating change
3.3. Formal astronomical data, placed in zodiac MP and on the additional stage under the dome
3.4. Preliminarily astronomical solutions of the zodiac MP. Notwithstanding the opinion of historians, it can't be dated with the XVI century.
3.5. Full solutions of the zodiac MP: 1785 or 1843. The best solution was August 11-12, 1843 A.D.
3.6. Astronomical dating with 1785 or 1843 makes us suspect that all the dates of the XV-XVI centuries, indicated on the walls of the church of St.Maria del Popolo, were fake. A numerical date 1516 on the zodiac is beforehand fake. There are no doubts only regarding the date 1823 on the outside wall of the church
3.7. The first drawings of the mosaics of Raphael were made by William Gruner after 1837, but printed in 1839-1844. It is ideally agreed with the astronomical dating of the zodiac MP, especially with the solution of 1843

Chapter 4. Short reconstruction of the history of Vatican
4.1. Initial foundation of Italian Rome in the XIV century
4.2. Italian Rome in the XIV – first half of the XV century
4.3. Escape of a part of the Constantinopolitan imperial nobility to Italy before a capture of the city by Osmans in 1453
4.4. The temple of St. Angel – the first asylum of popes-runaways and their first treasury for the brought treasuries
4.5. Vatican of the second half of the XV century – a nest of Reformation
4.6. When Vatican appeared, when Saint Peter's Dome appeared in it
4.7. A start of the Vatican library was put by the books, taken out from Constantinople before its capture in1453
4.8. The secret library of Vatican was established right after the death of the Great Empire in 1611

5.1. When, who and what for built Coliseum in Italian Rome
5.2. The authentic Coliseum is in Istanbul
5.3. The Coliseum of Istanbul stands on the springs. Probably earlier a pond was aligned to it for sea performances
5.4. The Coliseum on the old Turkish map
5.5. Pictures of the Coliseum in the Illuminated Compiled Chronicle
5.6. From where appeared the famous Istanbul name "hippodrome"
5.7. Why the obelisk of Konstantin on the hippodrome is called "Colossus" – it is not so big

6.1. When and by whom the Coliseum and other Istanbul amphitheaters were destroyed
6.2. The church of "Mother Mary of Mongol" in Istanbul, that is probably of Holy Mary, who has been here personally
6.3. On the map of Istanbul of 1572 ONLY ONE big mosque is shown. There are no any of the famous Istanbul mosques, allegedly built already long ago by 1572 by architect Sinan, on the map
6.4. Why the mosque on the map of 1572 is called the mosque of Murad? Probably due to a mess with the nearby mosque of Fethiye, which was rebuilt from a Christian church by the command of Murad III
6.5. The mosque of Fethiye – it is the former mosque of Holy Mary, and the mosque of Mihrimah – it is the former mosque of Mariam, that is Holy Mary?
6.6. When actually the biggest modern mosques of Istanbul were built?

Appendix. Data for calculation of the zodiacs, discussed in the book


About the authors
Home
Home in English