Russian chronicles. "Mongol-Tartar" conquest. The Battle of Kulikovo. Ivan the Terrible. Razin. Pugachev. Destruction of Tobolsk and dividing its large North American areas between Romanovs' Russia and European colonies on the East of America. Origin of the USA. 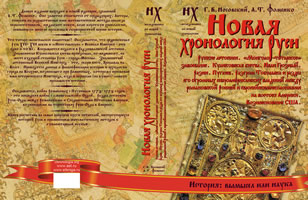 Chapter 1. CHRONOLOGY OF THE RUSSIAN HISTORY.

2. Shortly about our concept.

3. What is Mongolia and Tartar-Mongol invasion. Cossacks and the Golden Horde.

4. Baty-khan was called the Great Prince.

5. Romanovs-Zakharyins-Yurievs and their role in the motherland chronicle writing.

Chapter 1. RUSSIAN CHRONICLES AND MILLER-ROMANOVS VERSION OF THE RUSSIAN HISTORY.

3. Razdvilovskaya (Konigsberg) chronicle as the main list of the Primary Chronicle.

4. Forgeries in the Razdvilovskaya chronicle – the main list of the Primary Chronicle.

5. Other chronicles, describing a period before the XIII century.

6. The times change, and the speed of publication of Russian chronicles - not.

7. A traditional scheme of the ancient Russian history.

2. A short description of the 100-years shift in the Russian history.

3. "Tartar-Mongol conquest" and the Orthodox Church.

6. About conquest of Siberia.

8. Tartarian and Russian names in Russia.

9. What is Mongolian language?

10. Gog and Magog, prince Ros, prince Meshekha and Tubala. Russia-Horde and Moscow Russia on the pages of the Bible.

11. Where was Lord Novgorod the Great.

12. Falsification of the history and archeology of Novgorod on Volkhov.

13. A supposition about the appearance of the name Russia.

Chapter 4. ANCIENT RUSSIA WITH THE EYES OF ITS COEVALS.

1. Abul-Feda stated: "Russians are a folk of Turkish nationality".

3. What is painted on a famous Arabic Spanish medieval map Idrici.

5. How the coevals described the beginning of the Tartar-Mongol invasion.

6. Amazons in Russia in the XVII century. Purdah on the face of Russian women.

Chapter 5. OUR RECONSTRUCTION OF THE RUSSIAN HISTORY BEFORE THE BATTLE OF KULIKOVO.

1. The roots of Russian history.

2. Tartar-Mongol invasion as a unification of Russia under the reign of Novgorod = Yaroslav dynasty of Georgy = Genghis Khan and next his brother Yaroslav = Batu = Ivan Kalita.

3. Tartar-Mongol invasion in Russia – this is the period of the military governance in united Russian Empire.

1. Distemper in the Horde at the end of the XIV century. Dmitry Donskoy = Khan Tokhtamysh. The Battle of Kulikovo and the "Capture of Moscow". General view.

2. The Battle of Kulikovo.

3. Mass grave of the heroes of the Battle of Kulikovo in Old Simonov in Moscow.

4. Our reconstruction of the geography of the Battle of Kulikovo.

5. Probably, Moscow was based around 1382. One more duplicate of the Battle of Kulikovo – this is "Moscow" battle of Russians with Tartars in 1382.

7. Where was the capital of Dmitry Donskoy = Khan Tokhtamysh before the Battle of Kulikovo.

8. About the history of the church of the Nativity of Mary of Old-Simonov Monastery.

9. Emir Mamay is known to us today also under the name of captain of the thousand Ivan Velyaminov.

10. The Battle of Kulikovo on the pages of a famous book of Marco Polo.

11. Other places in Moscow, related to the Battle of Kulikovo.

12. A picture of the Battle of Kulikovo on an old icon of the XVII century.

13. When the coinage started in Moscow.

14. The history of the Donskoy Monastery in Moscow and parallels with the Battle of Kulikovo on the territory of Moscow. (Т.N.Fomenko).

Chapter 7. FROM THE BATTLE OF KULIKOVO TO IVAN THE TERRIBLE.

1. Capture of Moscow by Dmitry = Tokhtamysh in 1382 and the origin of Moscow state.

2. What is Lithuania and where Siberia is placed.

3. A parallel between the Russian and Lithuanian history.

4. Russia-Horde in the first half of the XV century. The time of internal wars.

7. Stamps of the great tsars-khans of the XV-XVII centuries.

Chapter 8. THE EPOCH OF IVAN THE TERRIBLE. WHEN, WHO AND HOW STARTED TO WRITE THE RUSSIAN HISTORY.

1. The Great Distemper – is a struggle of two dynasties. The end of Horde and the beginning of Romanovs.

2. Which authentic documents remained from the epoch of Ivan the Terrible.

3. Oddities in a traditional version of the history of Ivan the Terrible.

5. Our reconstruction of the governance of Ivan "the Terrible".

6. When the Illuminated Compiled Chronicle was written.

7. About allegedly many wifes of Ivan "the Great".

Chapter 9. THE TIME OF TROUBLES OF THE RUSSIAN HISTORY IN THE XVII CENTURY.

1. From the death of Ivan "the Great"= Simeon-Ivan – until the Great Distemper.

4. Struggle against Stepan Timofeevich Razin and the victory of Romanovs.

5. Destruction by Romanovs of the lists of noble families of the Russian-Horde Empire and creation of fake genealogic trees instead of them.

Chapter 10. RUSSIA AND TURKEY AS PARTS OF THE FORMER SINGLE EMPIRE.

2. Half-moon with a cross or with a star on the ancient emblems of the Russian cities.

3. Russian-Turkish title of the Moscow tsar "in three circles".

4. Uspensky monastery in Crimea. If we correctly imagine the history of the Crimean khans?

5. How Turkish called their sabres.

Chapter 11. STRUGGLE OF ROMANOVS WITH PUGACHEV OF 1773-1775 AS THE LAST STRUGGLE WITH THE HORDE. SEPARATION OF THE REMAINDERS OF RUSSIA-HORDE BETWEEN ROMANOVS AND THE APPEARED UNITED STATES OF AMERICA.

1. How the authors of the British Encyclopedia of the end of the eighteenth century imagined a map of the world.

3. A trip of А.S.Pushkin to the Urals in 1833 to collect information for "The history of Pugachev". Why Pugachevians called their military base - Moscow.

4. Many Ural cities allegedly of the Bronze Age, among which Arkaim was the most known, - this is, most likely, the traces of the Moscow Tartaria, that is the Siberian-American state of the XV-XVIII centuries A.D.

5. A capture of Siberia after the victory under Pugachev left a clear trace in the history of coinage in Russia.